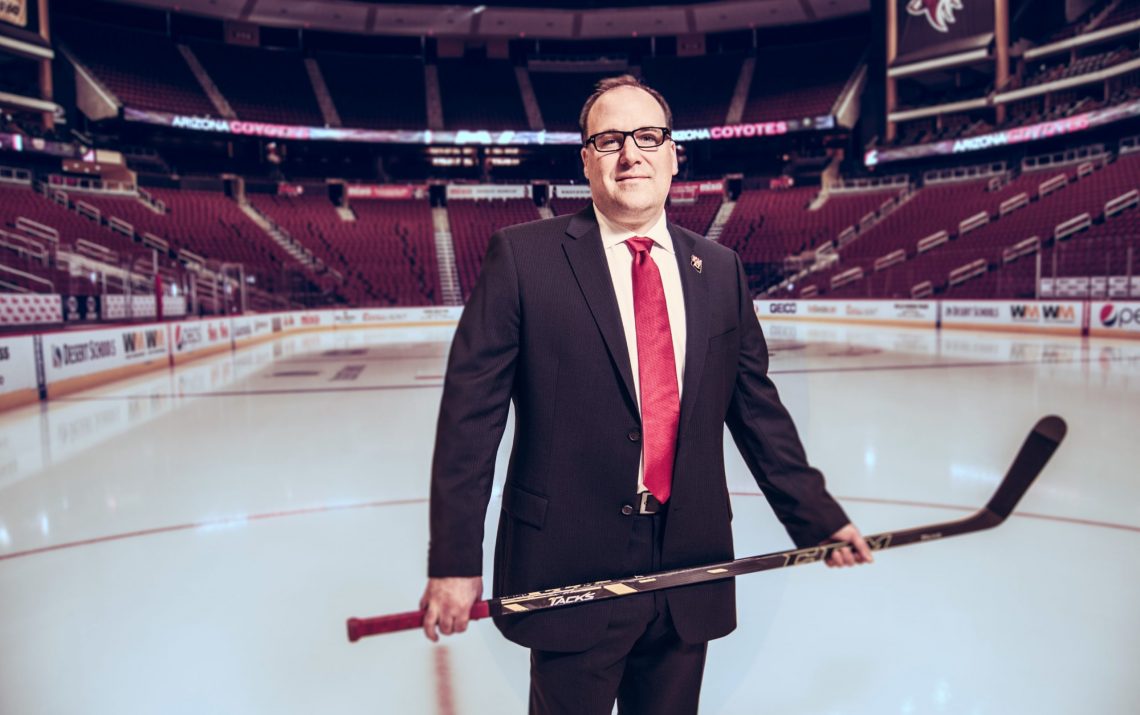 Co-owner, president and CEO of the Arizona Coyotes, Anthony LeBlanc, may come from the tech world, but he knows his hockey.

“Hockey is a way of life in Canada,” he said. “Some of my favorite memories are from watching hockey on Saturday nights with my father. Ultimately, I wasn’t a very good player, but I’ve always been a fan. To be involved in the league in this way is a dream come true.”

On Aug. 5, 2013, LeBlanc and his partners were able to achieve a goal years in the making. It was during this third attempt to purchase the Coyotes from the NHL that LeBlanc as a part of IceArizona Acquisition Co., LLC was successful.

After a deal with a third party fell through in early 2013, Daryl Jones reached out to LeBlanc again, proposing they attempt the purchase one last time. George Gosbee, Daryl Jones and LeBlanc met together in Glendale. “ It was the first time that we had the right people focusing on the right roles,” he said.

Gosbee, a new investor from Calgary, focused on needed equity. Jones – along with Avik Dey – put his energies into petitioning additional financing. LeBlanc worked with Glendale on the lease agreement. “Ultimately, the deal came together with the NHL and within five months we owned the team.”

As a co-owner, LeBlanc admits that he has a more vested interest in the success of this business than some CEOs. This stake is reflected in his leadership style. “I’m very demanding,” he said, “especially in this role. I have significant skin in the game.”

When looking for these key personnel, LeBlanc isn’t just looking for ability; he’s looking for the right cultural fit. “It is a necessity that they be able to disagree with me. This is what I need most from my leaders. I recruit people because I don’t know everything. I need people who are confident enough in themselves and their role to be heard and to execute.”

It is this trait that differentiates the success stories for LeBlanc. According to him, a team of yes-men is the kiss of death for any business. “I’ve worked for leaders who wanted that. I didn’t do well in that type of environment. It’s the worst thing you can do as a leader.”

The leaders that find success are effective because they empower their team, says LeBlanc. “Those who think they know the answers better than their staff and – even worse – better than their customers; those are the ones that fail. You have to listen.”

And, he doesn’t just talk the talk. The Arizona Coyotes are implementing this philosophy of listening. “We’re running focus groups with our fans, those who come to every game and those who maybe haven’t been in a while,” he said. “We want to know what they think. We know that at the end of the day we need to have success on the ice. But there are so many other aspects to a hockey game, to the experience. We want to make it right for the fans and our sponsors.”

LeBlanc came to the Coyotes with the experience and the knowledge of the tech industry. Having worked for Research in Motion (RIM) – now known as BlackBerry – LeBlanc was taught the keys to leadership from COO Don Morrison. “He was a fantastic leader, and a lifestyle mentor,” LeBlanc said. “He was someone I always looked up to and wanted to emulate.”

The biggest lesson Morrison imparted was to move up the corporate ladder only when you’re ready. “People are excited when they get a promotion, but they’re not always ready for the role,” LeBlanc explained. “I matured a lot under his mentorship. He was brutally honest about my faults, but I was able to take that feedback and grow from it.”

LeBlanc implements that same leadership style in his company to this day. “Constructive criticism can be key to improving yourself. I’ve had the pleasure of mentoring people who were able to grow and become exceptional leaders. Not everyone listens and that’s too bad. You need to constantly learn and listen. None of us knows everything.

CHANGE ON THE HORIZON

Following the transition in ownership, perhaps the biggest change for fans was the name. Formerly the Phoenix Coyotes, the team became the Arizona Coyotes on June 27, 2014 at the NHL Draft. “It was a two-fold decision,” LeBlanc admitted. “First, the team doesn’t play in Phoenix; Gila River Arena is in Glendale. And, rather than be known as the Glendale Coyotes, we decided to include the whole state. Secondly, it is reflective of our fans. They aren’t just Phoenicians; we have season ticket holders who drive to games from quite faraway like Tucson and Flagstaff.”

For the staff, the new ownership has brought more than a name change; it’s been a total 180 in terms of culture. “I’m trying to build a culture of accessibility. I encourage senior staff to share their ideas,” he said. “Not to sound cliché, but my door is always open. My only stipulation is that if they come in with a critique, I expect them to have a solution or at least an idea.”

Measuring the achievements in the corporate culture, LeBlanc knows that they aren’t nearly done revitalizing the business. “We’re not fully there yet,” he said. “It takes people a while to feel comfortable with that communication.”

This cultural change extends to the Coyotes community involvement. Acknowledging that the nonprofit outreach wasn’t strong, the Coyotes have transitioned the charity into a foundation that provides grants to countless organizations. “Our new director is boosting our presence in the community,” he said. “We certainly want to grow that more.”

Recently, the foundation along with the city of Glendale and KaBOOM built a hockey-themed playground. “We want to do more of that,” he said. “We want to put our money and our resources back into the community.”

Since the leadership is new to the Valley, they are taking steps to become involved personally. LeBlanc now sits on the board of the Big Brothers Big Sisters of Phoenix.

Looking ahead, LeBlanc says the brand is taking center stage.The Coyotes franchise has had a different slogan every season. This year, they will focus on an all-encompassing marketing campaign that will sustain for the long-term.

And, of course, the owners and general manager are working closely to see some success on the ice. “We have a good nucleus of young players. We know we need to make changes, but we want to be better and continue to improve over the years.”

Overall the company has seen some significant changes since the summer of 2013. While there is still a long road ahead, LeBlanc is proud of what they’ve been able to achieve. “We needed to get our swagger back,” LeBlanc said. “We’re here. We’re on solid footing. It’s not going to happen overnight, but we’re prepared to put in the work. We’re here for the long-term.”