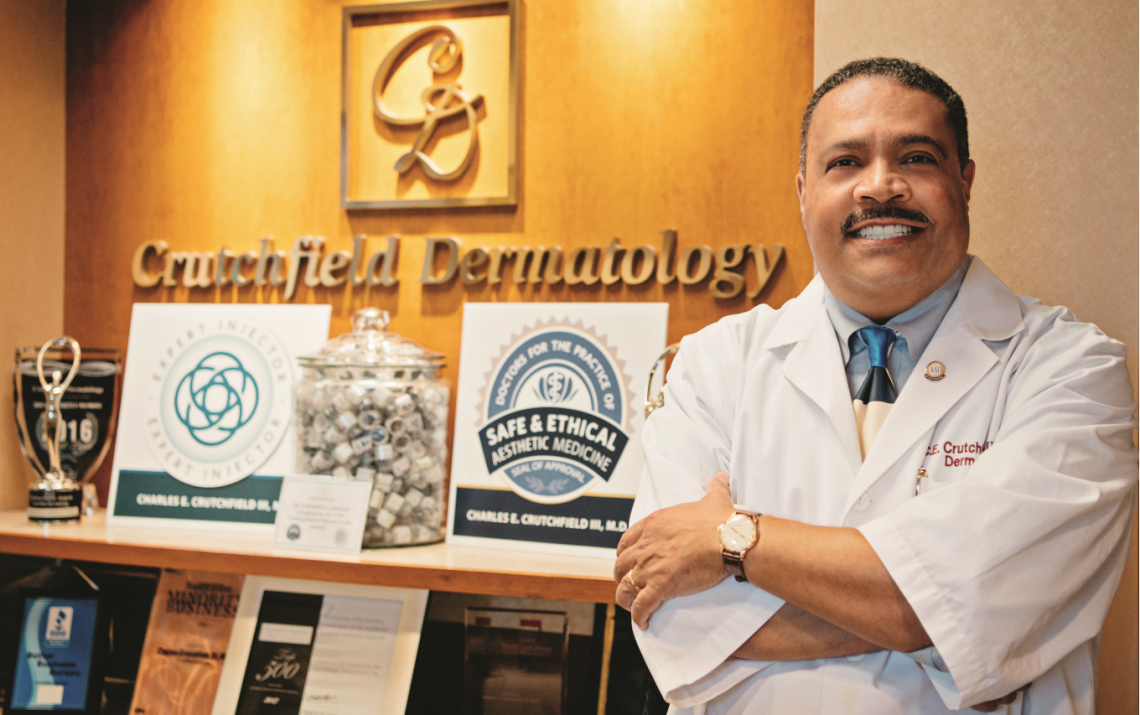 Charles E. Crutchfield III, M.D. “stands on the shoulders of giants” as the progeny of generations who have held education in high regard and become great contributors to Minnesota society. His grandfather held a master’s degree in public health, and his grandmother, whom he describes as a “spectacular woman,” was the first African-American teacher in the Minneapolis public school system. He remembers being her first grandchild, and therefore her star pupil, for whom she made a game of learning. His father, Dr. Charles Crutchfield Sr., became the first African-American obstetrician to practice in Minnesota and is credited with the delivery of more than 10,000 babies.

Dr. Crutchfield also enjoys the unique distinction of having attended medical school – twice. His first time through was with his mother, Dr. Susan Crutchfield, who was pregnant with him while she was earning her medical degree from the University of Minnesota Medical School. Little Charles was just 3 years old when she graduated in 1963, one year ahead of the Civil Rights Act. She was the first African-American woman and, at the time, the youngest person ever to graduate from the University’s medical school.

Of course, it was a given that Dr. Crutchfield would follow his esteemed parents to a career in medicine. He admits, however, that after an agonizing genetics exam early in his undergraduate education at Carleton College, he began to question his future as a doctor. He consoled himself by trudging off to a local theater to see the movie “Top Gun,” and was inspired to become not just a pilot, but a military aviator. He passed the military flight aptitude test with flying colors and was admitted to flight school.

“The truth is, I was a terrible pilot, and I had a fear of killing myself,” he said. He wisely gave medicine a second look, and the 60,000 patients who rely upon him today are glad he did.

Dr. Crutchfield chose dermatology after taking a gastrointestinal class in med school and learning that a particular skin condition was a clue to diagnosing stomach cancer. “I was fascinated that by looking at the skin, you could know what’s going on inside the body,” he recalled. “I have dyslexia, but I have an almost photographic memory for images. For me, dermatology is not only fun, but it’s relatively easy because I love images and pattern matching.”

Dr. Crutchfield made use of his natural aptitudes and embraced his calling. After graduating with his medical degree from Mayo Clinic, he completed an internship at the Gundersen Clinic, his dermatology residency at the University of Minnesota, and then he immediately joined Dermatology Consultants, a well-known St. Paul dermatology practice. But after attending a lecture discussing a new practice paradigm that called for a dedicated nurse in every exam room, freeing physicians to spend all their time seeing patients, the enthusiastic young Dr. Crutchfield presented the idea to his colleagues and received a lukewarm reception.

Departing on the friendliest of terms and with a great deal of respect for his dermatology consultant colleagues, Dr. Crutchfield opened his own practice only three months later with the help of his advisers at Healthcare Management Resources. He was overjoyed when most of his patients followed him, and on his first day in business he saw nearly 50 patients.

Dr. Crutchfield has since become nothing short of a local celebrity, as a board certified dermatologist who has earned professional and civic accolades too numerous to mention. The fact that the Vikings’ U.S. Bank Stadium is barely large enough to contain all his patients in one seating is a testament to the quality of care he and his staff are providing. (He also happens to be the team dermatologist for the Minnesota Vikings, Twins, Wild and Timberwolves organizations.)

In his aesthetic practice, he is among the top 1 percent of Botox-administering physicians in the world, having administered a staggering 900,000-plus units of the medicine – despite his “less is more” credo. However, aesthetic dermatology isn’t all fluff . Improving one’s appearance can significantly impact self-esteem and enhance personal and professional relationships.

“For example, some people come to me for Botox because they have a deep crease between their eyes that makes them look angry. I can erase that, and they feel great because people actually perceive them differently.”

Dr. Crutchfield sees every patient personally, never delegating even aesthetic procedures to someone else. While it can take months to get an appointment, as his services are in demand by patients not just in Minnesota, but also across the country and around the world, Dr. Crutchfield never compromises the health of any patient. He will always see a patient the same day if their primary doctor calls to say he or she is worried about their condition.

Dr. Crutchfield has spent more than 15 years perfecting a medical practice that delivers superlative care with unprecedented efficiency, and in doing so, he has learned a thing or two about the business of medicine – and about business in general. He shared the fundamentals of his success, principles he believes are essential to any healthy and sustainable enterprise.

Let other people do what they do best. “I have a lot of common sense, but I don’t have an MBA. I rely on other professionals to augment the business side of my practice. My goal is to provide the highest quality care, but I can’t do that if I don’t keep the doors open.”

Have an exceptional product. If you don’t, nothing else matters. “We have set up a system that delivers the highest quality, consistent health care, and we want people to have a lovely experience from the time they walk in the door. We call our receptionists ‘Directors of First Impressions.’ All our staff members have cards and tell our patients to call them personally if they have questions or concerns. They will solve their problem or get them to the person who can, including me.”

Let people know you have an exceptional product. “I took a course in marketing because I wanted to be super efficient. It doesn’t matter what advertising or marketing costs; it matters what it earns. We track our marketing on a regular basis and look at the data. If it’s not working, we move on.”

Be quick to hire the best and fire the worst. “I’ve learned to hire the best, and if it’s not working, to cut ties faster. We always hire with a probation period. Then, before we make a hire permanent, we get buy-in from all department employees. If they vote yes, they also have a vested interest in coaching and bringing that employee along. Like all successful businesses, our best and most valuable asset is our exceptional, world class staff.”

Sleep on it. “When I was younger, I was fiery. I’ve learned when I get mad, not to act on it that day. I also consult my mother, father and wife. The tincture of time, a good night’s sleep, and the wisdom of counsel bring clarity and focus to any problem.”

Do what you love. “I hate getting up in the morning, but I love going to work. I’m lucky to have this weird set of skills that allow me to help people feel better. I believe when you let people do what they love, the rest will follow.”

Give back. “As members of the community, we believe in giving back. If it’s a local thing, we’re all in.”

The Crutchfield Dermatology Foundation was created in 2012 and continues to provide scholarships and educational products designed to promote good health in Minnesota. The foundation also supports the Doctors Charles and Susan Crutchfield Annual Dermatology Lectureship Series at the University of Minnesota Department of Dermatology, which provides education on the topic of dermatological aspects of skin of color and practice management principles. At the most recent Doctors Crutchfield lecture, Darrin Rosha, University of Minnesota regent, commented, “Doctors from the Crutchfield family have been providing Minnesotans with quality health care for over half of a century.”

Make family a priority. “As a parent, I have three goals: (1) To provide a safe, educational and nurturing environment; (2) To teach them right from wrong so that when I am not around, they will make the right decisions; and (3) To build wonderful memories by engaging in exceptional opportunities.”

As the recent solar eclipse approached, Dr. Crutchfield felt compelled to celebrate this extraordinary event with his wife and children. But he faced a dilemma common to most busy professionals – he had a full schedule and seemingly no time to get away.

After laboring over the decision, he put his staff to work calling clients and rearranging his schedule. Then he put his family on a plane bound for Idaho, where they shared this magical experience together.

“We had the time of our lives,” he said. “It was unbelievable – life-changing! Sometimes, you just have to take time with your family.”