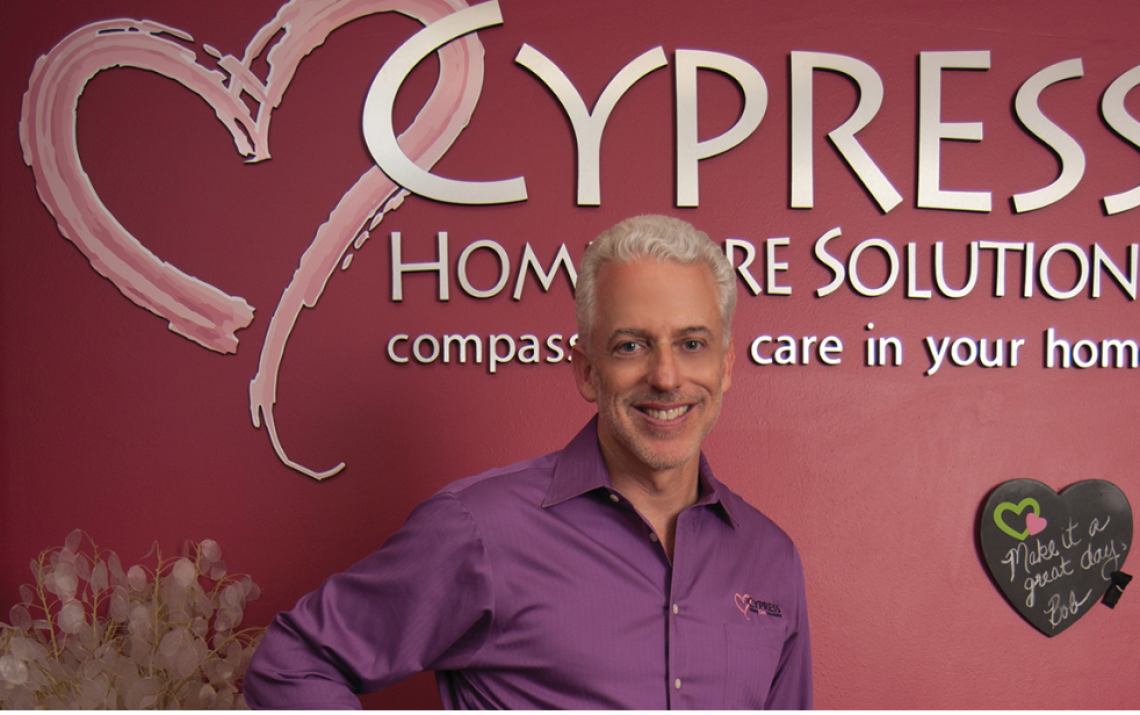 Bob Roth grew up in Baltimore. Roth’s grandfather and great uncle emigrated from Russia in the early 1900s and became entrepreneurs – selling butter and eggs from the back of a horse-drawn cart. Roth’s parents married in 1959, and his father, Sheldon, expanded the butter and egg business into a full-line, food distribution company.

Roth graduated with a bachelor’s degree in business management, a minor in marketing and played lacrosse at Ithaca College. He was just beginning his career in consumer products marketing with Quaker Oats, when his 48-year-old mother, Joan, was shattered by a series of near-fatal heart attacks.

“The doctors put her into a drug-induced coma for 18 days,” Roth remembered. “She spent over a month in ICU. As a result, she suffered short-term memory loss and a change of personality. She was left with severe cardiac damage. Mother was always a beacon of light. She was the center of all activity in the family and community. Suddenly, she was a changed person.”

Roth, his father and brothers were devastated by this unforeseen crisis, as they embarked on what would be an 18-year labor of love caring for Joan. Later that same year, Roth’s father received a buy-out offer from a major food company. Eventually, the company asked him to move to Phoenix to oversee a failing food operation there. “It was a great opportunity to get mom into a better climate for her health,” Roth said.

After working for Gatorade in the Northeast for several years, Roth took a job with Dole Foods on the West Coast. After a few years, he was able to transfer to Phoenix and be close to his parents.

“My brothers and I decided that being caregivers for mom was a labor of love, and we could provide the same level of care for others in the community,” Roth said. In 1994, the brothers opened Cypress Staffing Services, run by Joe Roth. “Basically, we wanted to provide respite for families, and then we found an opportunity to do some medical staffing too,” Roth said.

“We all got to live in the same community for six years until mom’s passing. Each of us had a day that we kept mom busy. Her quality of life for nearly 18 years was not ideal, but at the same time she got to witness her three boys get married and saw all nine of her grandchildren born.”

Near the end of her life, Joan Roth broke her foot, and received care from Cypress. “I wasn’t really involved in the work that the caregivers did until that time,” Roth said. “I sat on the board and helped with other aspects of the business. I finally got to see it up close. I realized that when a care recipient opens the door to their home, they open up their whole lives to the caregiver. I witnessed firsthand the relationship. It is truly a unique circumstance, where compassionate care fosters mutual respect and trust. What the caregivers did for my mom was phenomenal. They were angels.

I was equally affected by the understanding that as much as the clients require care, the individual who works as a professional caregiver is answering this calling because they have so much to give. That was my big aha moment.”

“It was through this experience that I realized the meaningful work that we were doing at Cypress, but I didn’t think I was ever going to work in the business,” Roth said. Just before Christmas in 2003, his brother Joe Roth called to ask if he would consider running the business. Roth’s father and wife both encouraged him to take the opportunity.

Roth committed to working for Cypress for two years while splitting his time between Cypress and his consulting business. “My intention was to build the culture and plan for growth and then find a successor to run the business,” Roth admitted. Only three weeks later, Roth gave his consulting clients to his business partner and fully embraced his role at Cypress. “I am about to begin my 11th year this month. I love this business! It has never felt like work. I love helping people. This is who I am. My wife and my dad both recognized that I belonged here.”

Roth enthusiastically rebranded the company, changing its name to Cypress HomeCare Solutions. He innovated a solutions-driven corporate culture where people matter. “We look for people with heart and compassion,” he said. Roth phased out medical staffing services “because I wanted to focus on home care. One of the things that I learned in my career is that you have to know your value proposition. I needed a differentiator.”

When Roth met his now chief operating officer, Scott Spangler, he was the then-director of health and safety services and blood services for the American Red Cross. Spangler oversaw a community training program for family caregivers. “We reviewed it and used it as foundation for our caregiver training,” Roth said. “I wanted a company with great caregivers and a great training program. I had found my differentiator.”

When the Red Cross canceled its caregiver training program, Roth was asked if he would be interested in taking the inventory from their training lab; this was the genesis of the Joan S. Roth Caregiver training lab. “We decided to make the training lab available free of charge and open to the community specifically to aid and assist family members in learning how to care for their loved ones,” Roth said. “Over nine years, we have trained over 700 families.”

For the past seven years, Roth has been an advocate for legislating the protection and public safety of the older adults in our community. During this time he and other colleagues of the home care industry have attempted previous initiatives that were not passed. Most recently, Roth participated at the State of Arizona Committee of Reference (COR) hearing on Dec. 10, 2013. The in-home care industry and stakeholders are “making their third attempt to create some minimum standards for companies that deliver home care services. There are 28 states that have legislation and 22 that don’t.”

Approximately 80 million people began turning 65 in 2011. The last of the baby boomers will turn 65 in 2029. “By 2020, Arizonans aged 60-plus will make up one quarter of the state’s population, approximately 2.1 million people. The 85-plus population is the fastest-growing age group in the state and will increase by 141 percent by the year 2020. Not only do people want to stay home, there are not enough beds in individual and assisted living communities to handle those people that are unable to stay home. Health care is changing rapidly. It doesn’t matter what your politics are – things are going to look different tomorrow. The delivery of services is going to look different. We are changing lives every day by enabling so many aging adults to stay at home and have some semblance of independence,” Roth said.

Cypress and Roth have received numerous awards, but Roth is proudest of receiving the Better Business Bureau’s 2013 Business Ethics Award. “Our business is not regulated in our state, and there is no better consumer advocate than the Better Business Bureau. A home care provider has never been a nominee before. This is a huge tribute to my team and to all of the people in my trade who are doing the hard work.”

Roth is active in numerous community organizations, including the Banner Alzheimer’s Institute. Roth played lacrosse in high school and at Ithaca College, he remains passionate about the game of lacrosse today and volunteers as the assistant coach for the Horizon High School girls’ lacrosse team. “I love teaching and working with these young women,” Roth said. “To many of my players, I am a parent figure. I feel a responsibility to help mold these young women into community leaders.”

Roth and his wife have three daughters. “My family is everything,” he said. “They are my rock, my biggest fans, and they motivate me to do the things I do. Susie is my wife of 24 years. She makes me a better person, and I could not be who I am without her. She makes a great life for my children and for me.”

According to Roth, one of the greatest compliments he ever received came from a local rabbi. “We cared for his father for over five years until he passed away. …The rabbi called me out by name at the funeral and proceeded to name each of the caregivers who had cared for his father over the five years. He said, ‘Not only did they add years to my father’s life, they gave him life in his years.’”

“It is an honor and privilege to care for those who have paved the way for us. One of the greatest by-products of caring for older adults is learning about the amazing lives they have lived, each client of ours is like a good book,” Roth said. “I love what we do for families. This doesn’t feel like work – it feels like a calling.”