Brad Schraut: Breaking With the Establishment is Good Medicine 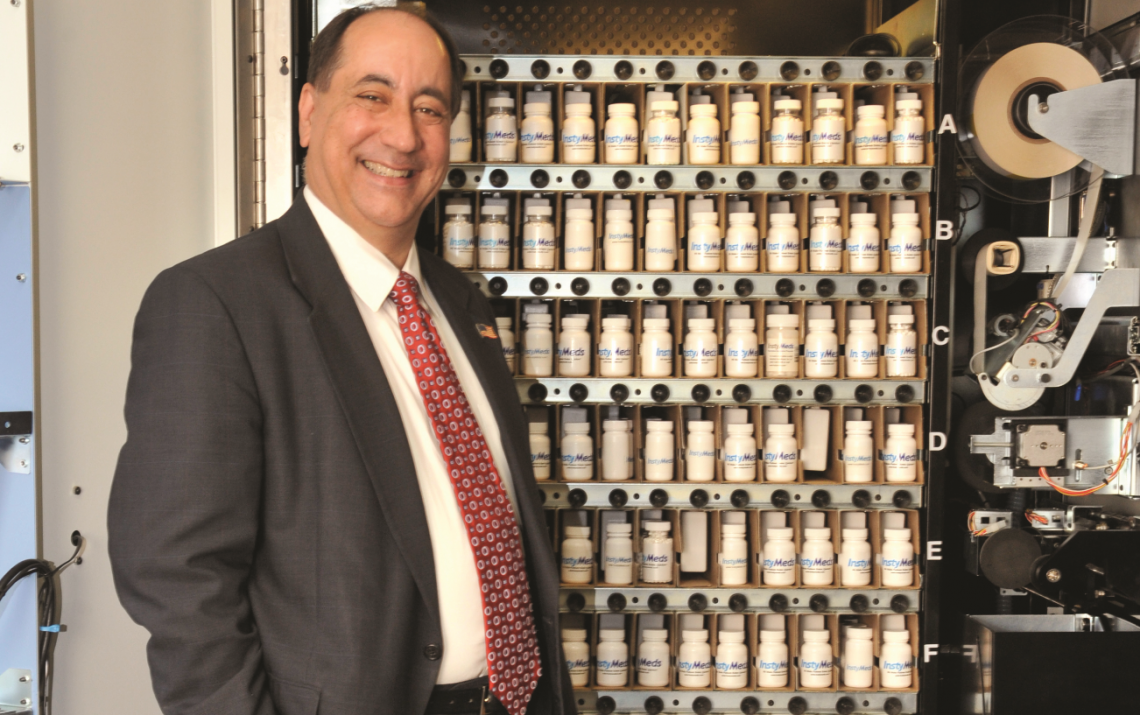 Imagine that you are the parent of a sick child who is in immediate need of an antibiotic. Your child has a high fever, and without prompt treatment, his or her condition could become lifethreatening. You have just come from the pediatrician’s office, but now it is after business hours. You make several stops, desperately trying to find someone who can help you. The first two pharmacies are closed. At the third, they are out of the antibiotic you are seeking. You become more frantic, watching your child grow sicker, and wondering how it is that in America, where virtually everything is available 24 hours a day, you can’t purchase a common medication.

Emergency room physician Dr. Rosenblum had this experience, and he developed InstyMeds as a means of delivering fast, convenient relief to sick people by helping physicians dispense acute medications right at the point of care. InstyMeds is an ATM-like machine that dispenses medication directly to a patient at a doctor’s or dentist’s office, a clinic or hospital, or even a corporate employee wellness center. InstyMeds dispenses the most common, acute medications that people need for immediate relief, like antibiotics, pain medications, inhalers, antinausea medications and anti-diarrheal medications. This miraculous machine combines original software and hardware applications to deliver medications safely and in compliance with industry regulations. Due to its triple bar code check system, InstyMeds has a zero error rate, in contrast with the industry average of 16 errors in every 1,000 prescriptions.

Once the doctor consults with the patient and provides a computer-generated prescription voucher, the patient can use the InstyMeds machine to pay for and obtain medications labeled with his or her name, along with instructions and warnings, in only 90 seconds. The system also automatically reports to most insurers and calculates co-pays.

InstyMeds receives rave reviews from patients, 96 percent of whom report they are highly satisfied with their experience, and 98 percent of whom report they would use InstyMeds again. The largest demographic of InstyMeds users, patients over age 65, find that InstyMeds is actually simpler to use than an ATM machine, with fewer choices and software that recognizes their voucher code and spontaneously processes their prescription.

But in an industry so deeply invested in the conventional methods of care, advances like this one are not always readily accepted or implemented. CEO Brad Schraut is a passionate believer in his company’s cause, which is summed up in the battle cry of “getting amoxicillin to a 2-year-old at two in the morning.” He is a pioneer of change, who has spent his career transforming industries with new technologies, and this is a technology that is measurably improving lives of people around the globe.

Born in the small town of Eagan, Minnesota, Schraut describes himself as “an entrepreneur from the word go.” He followed his fascination with technology from discotheques to hangars, before his attention was arrested by a new thing called “software.” In 1985, he and his partners began developing patient management software for doctors, and they combined with five other software companies before finally going public as InfoCure Corp. in 1997.

But this serial entrepreneur and rules breaker found he was not so comfortable amid the confines of a giant conglomerate. “I met President Bush at a big healthcare event, and he said something that I’ve always believed myself, ‘I’ve traveled all around the world, but I’ll tell you what I love most about Americans. When you go to other countries, people will tell you their problems. But when I travel in America, people see problems, but they also want to tell me how to fix them. By nature, we Americans are entrepreneurs, inventors and problem solvers, and we don’t look to anybody else in the world to solve our problems for us.’ I told him that’s how I feel every day. When I wake up in the morning, I’m trying to figure out what problem in America needs solving that day.”

Schraut first became involved with InstyMeds in 2001, and a few years later he was asked to step in as CEO to help get the product to market. At first he declined, but only a few days later, he spent a harrowing night trying to obtain amoxicillin for his 5-year-old son who was desperately ill with a strep infection. After a 30-hour ordeal, Schraut picked up the phone and accepted the job. “What we do here is very personal to me,” Schraut said, “If you meet my team, you’ll find that the nearly 50 brave souls who spend every day helping to get medications to people quickly, almost all have a story about something that happened to them and that is the reason they want to work here.”

To most, the idea of providing instant, convenient medication delivery sounds welcome. But opposition to InstyMeds has come from all sides of the medical establishment, largely motivated by fear that InstyMeds robots will replace pharmacy professionals in the long run. However, Schraut is quick to defend not only the essential nature of his service, but the unquestionable need for pharmacy professionals to continue serving patients. He explained, “We don’t see independent pharmacies much anymore because insurance has taken all of the margin out of dispensing meds. But a pharmacist’s job is not just to hand out meds, but to tell us how to take them and what the side effects are. Now the industry is at a huge crossroads, as the important role of pharmacy professionals in patient care has been devalued by the margin erosion. The rest of the world is moving faster than the United States in realizing the value of pharmacists.”

To illustrate, Schraut shared the story of his 80-year-old father who was taking 20 different medications and not feeling well for it. Schraut brought a list of medications to InstyMeds Vice President of Pharmacy Services, Julie Geason, a 30-year pharmacy professional with extensive credentials and expertise. After evaluating the interactions and side effects of the 20 medications, Geason suggested eliminating eight of them and changing the dosing schedule, resulting in a patient who was less medicated and who felt markedly better.

“Insurance plans are paying pharmacists for the act of dispensing medications, when they should be paying them for their expertise about medications. I think the only way for us to overcome the opposition to InstyMeds is to keep educating the industry about what we really do. The truth is that the profit margin on most of what we dispense is minimal. In the future, I don’t see InstyMeds filling chronic medications, like blood pressure or diabetes medications. We believe you need to go to a pharmacist for chronic meds. Your doctor generally sees you once a year, so who is seeing you several times in between to make sure nothing has changed since your last refill and you’re having no side effects?”

InstyMeds provides a number of other benefits to patients that Schraut and his team didn’t anticipate when they began. “You don’t always know who you are when you start a new venture, because you’re on a journey no one has ever been on before. It turns out that we didn’t just invent a new product, we invented a whole new industry.”

That new industry is a complement to the existing healthcare system, one that automates an essential, low-profit area of service, potentially saving the industry billions in healthcare costs. In part, this is because 30 percent of patients never fill their prescriptions. Ten percent of those people end up being hospitalized, at an average cost of $33,000, and many of those rely on state-funded insurance plans. The annual cost to taxpayers is staggering. However, patients with access to InstyMeds demonstrate a fill rate of 95 percent, meaning that most get well and don’t require additional treatment.

Schraut and his teammates (the words “employees” and “human capital” are prohibited at InstyMeds) are truly on a mission of mercy. They believe in the service they provide, one that not only helps people feel better faster, but one that saves money and lives. “We have this miraculous team of 50 people here who run a 24/7, international company 365 days a year. On nights, weekends, and through every major holiday, we are helping people get their medications. We have uncommon people doing uncommon things.”

Schraut and his colleagues all receive a message on their cell phones at 6 a.m. each morning, telling them how many lives they have touched that day. They wake to the knowledge that they are making a significant difference in the lives of others. According to Schraut, that is the true measure of his company’s success.