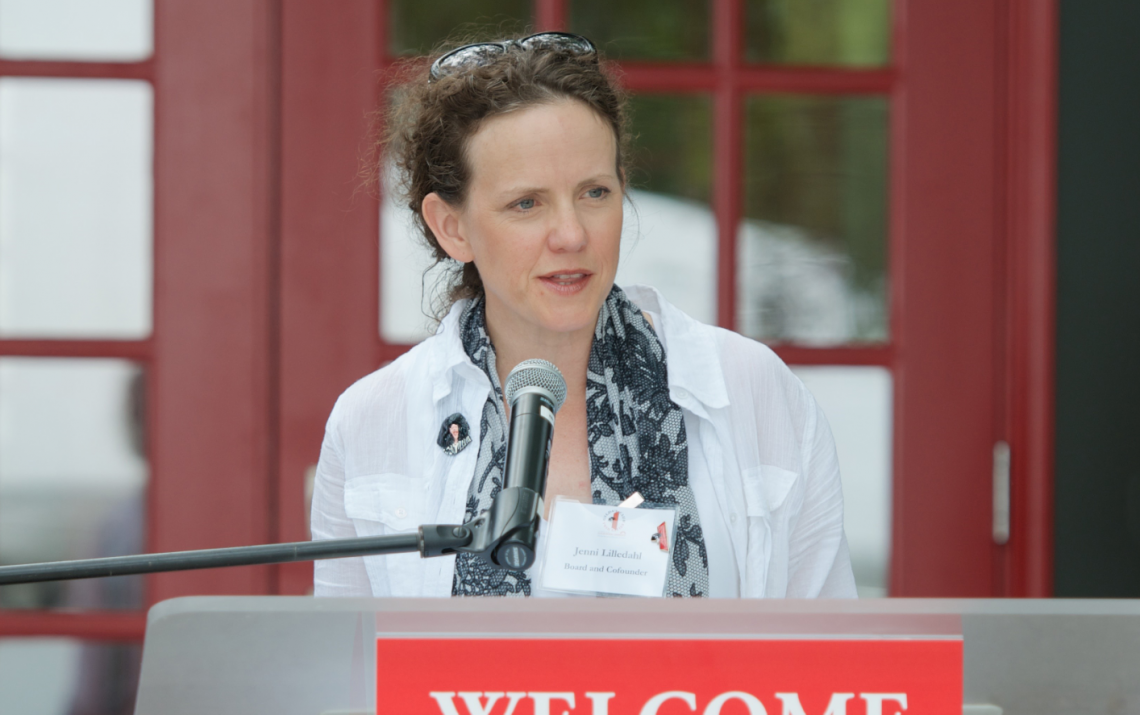 Imagine a space of complete creative safety, where your only directive is to be your humble, authentic, flawed self. Sound freeing? Sound scary? These are just a few of the ingredients that John Sweeney and Jenni Lilledahl, owners of the Brave New Workshop (BNW), prescribe for success in business and in life.

Sweeney and Lilledahl are celebrating their 20th year as owners of this creative enterprise, which they acquired from local entertainment legend and comedic innovator Dudley Riggs. Over the past two decades, they have honored Riggs’ legacy and expanded on it by fostering the art of improvisational comedy and evangelizing its guiding principles through community service, experiential learning and professional development programs.

Riggs was a veteran circus performer who, after an injury, combined his early training in the vaudeville method with the improvisational style of jazz to create a new art form he called “instant theater,” something we know today as “improv.” He opened the Instant Theater Company in New York, which he later debuted in Minneapolis as the Brave New Workshop.

When Sweeney and Lilledahl first bought the theater in 1997, they were in love with the idea of owning the nation’s longest running satirical comedy theater in a city with the second most theater seats per capita in the nation behind New York. But soon after, with the myriad new entertainment choices born of technology and the accompanying cultural shift, more than one-third of theaters in the Twin Cities closed their doors. It was time for Sweeney and Lilledahl to do some serious improvisation.

“What we discovered was that heart, soul and passion are the core assets of theater,” Sweeney recalled. “If we were going to be sustainable, we had to look at our business model and figure out how we could infuse those into our community.”

While Lilledahl grew the student union school, Sweeney set out to apply those same principles to the corporate workspace, and a new genre of business consulting and learning programs came into being. The company’s creative outreach division has now conducted nearly 3,000 keynote engagements and corporate training sessions for such notable companies as UnitedHealth Group, General Mills, Target Corporation, Best Buy and Honeywell, to name a few.

So exactly how do the tenets of improv translate from the stage to the boardroom? Sweeney teaches forward-thinking corporate leaders to embrace behaviors he calls the Big Five.

The practice of these behaviors leads up to a mindset of discovery, which allows individuals to be their best, most productive, happiest selves, as described in Sweeney’s latest book “The Innovative Mindset,” co-authored with Elena Imaretska and released in 2015 by Wiley.

“Most companies spend a lot of money on new tools and skill training, but their people are not in the right mindset,” he explained. “It just doesn’t work, and it’s still mysterious to many business owners and managers. As improvisors, mindset is all we have. We can create something from nothing for our customers right away, and make them happy. We do that every moment on stage, and we can teach business leaders how to do the same thing inside their organizations.”

Sweeney and Lilledahl’s combined innovative talents have yielded many successes, like their acquisition of two downtown buildings to house their operations, including one of Minneapolis’ first newsreel theaters, built in 1922. The iconic venue still retains its Art Deco terra cotta facade and distinctive, original doors. This, and the BNW’s theatre space across the street, are also available for event hosting.

But Sweeney and Lilledahl agree that their proudest achievements are those centered on their contributions to the community. The impact they and their colleagues have made begins with a workplace focused on people rather than on profits. Since 1997, they have grown their organization from four employees to more than 120, all of whom embrace another additive to the secret sauce, improv’s Golden Rule: Take what you have, make it bigger, and give it away.

“The ideas of being resourceful and constantly recreating yourself are part of a culture that has always existed in our company,” Lilledahl commented. “There is also an underlying foundation of respect of humans and our differences. Sometimes there is a misunderstanding about comedy and satire, that it can be mean or hurtful. But we are proud of our foundation of respect. Our motto is ‘Promiscuous Hostility, Positive Neutrality.’ What we mean by that is that we’re not for or against anything. There are no sacred cows, just points of views to be discussed.”

The company is unconventional in that it has no time clocks and no vacation policy. When someone needs extended time off to have a baby or cope with a personal crisis, it is granted – with pay. However, the trade-off is the high level of expectations inside the workplace. It means showing up and doing whatever needs to be done. Both from humble backgrounds, Sweeney and Lilledahl lead by example, working long hours and rolling up their sleeves to do tasks that lack glamour.

Motivated by a workplace high on teamwork, self-expression and ingenuity, the people at BNW carry that momentum forward into the community. As a result, the company’s philanthropic initiatives are almost too numerous to count. Student union scholarships and outreach programs benefit adults and children alike, including kids with special needs and those in the judicial system, by helping them to improve communication and build self-confidence through play.

BNW also hosts something called Happy Hour Squared. Sweeney explained, “Every third Thursday, people come to our building and hand make 2,000 sandwiches in two hours. Then Allan Law, the Sandwich Man, fills his van and delivers them to people in need across the city. We’re coming up on 100,000 sandwiches.”

After losing her sister to cancer, Lilledahl set out to open a local chapter of Gilda’s Club, a national cancer support organization named for former Saturday Night Live comedian, Gilda Radner, who also succumbed to the disease. Since opening their doors three years ago, the organization has helped thousands of area residents with free services spanning support groups, healthy lifestyles initiatives, education and social events. “I’ve also started an improv class for people living with cancer,” Lilledahl said. “We meet every week, and everything is free. In my 25 years in improv, I’ve met some pretty famous people and performed on some cool stages, but this is in my top three experiences. During that one hour a week, people get to forget about their illness and laugh, connect and have fun. They use their creative energy to reframe what is happening in their life. I think this is one of the great stories of how we’ve taken what Dudley created and expanded on it.”

Sweeney finally revealed the most important ingredient in BNW’s surreptitious salsa. “Businesses and employers are always looking for the secret sauce, and I believe there is one: understand how you can spend every moment serving others. Make that your motivating factor. When companies go astray, it’s because they’ve lost a sense of who they are serving. The legal construction of corporations and shareholder values creates an amazingly complicated dynamic around who companies are serving. But figure out who you serve. Just like grandpa told us, you end up feeling better about yourself and finding the real meaning of success and happiness.”