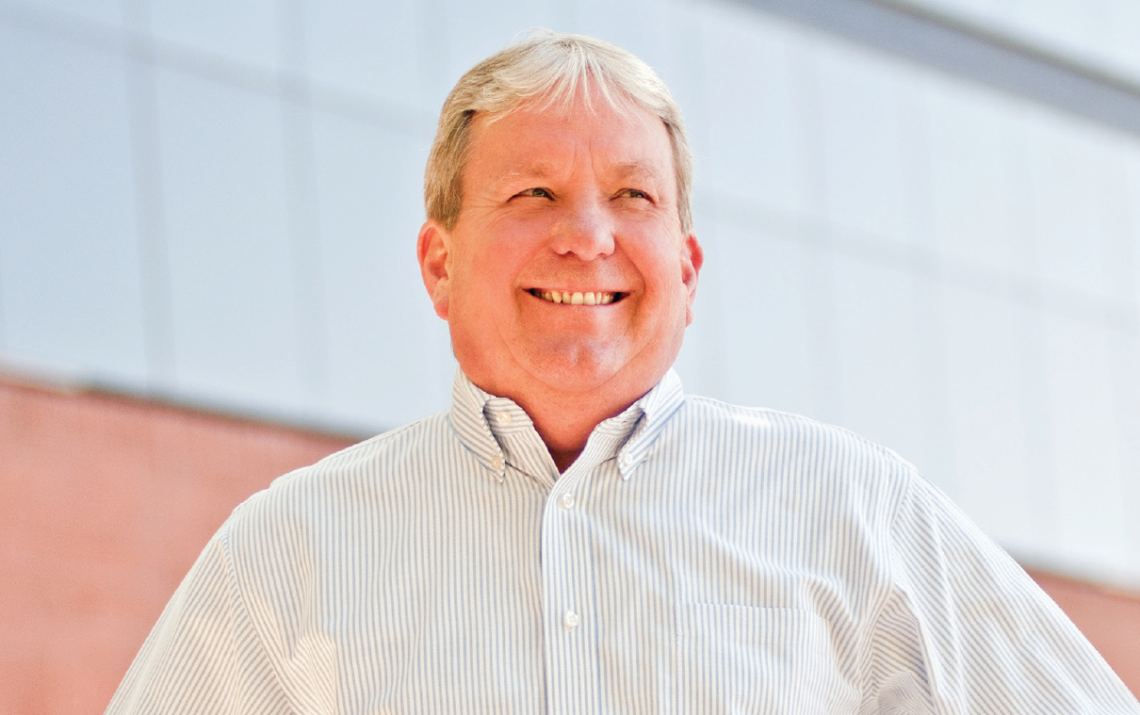 Dan Swindall joins former Phoenix Suns owner, Jerry Colangelo – our inaugural CEO of the Year – as a guest speaker at the fourth annual Integrity Summit in Phoenix. Colangelo, a co-founder of the Integrity Institute, co-hosted the event.

Blackstone Security Services, Inc. president & CEO Dan Swindall knows that to really hold on to something, sometimes you have to let go.

“There was a time when I did everything myself,” said Swindall, Blackstone’s founder. “I started the company 22 years ago. It took me awhile to let go of some things, but over the years I’ve learned to let go and empower my managers.”

Blackstone Security is a locally-based security company with eight offices in Arizona, New Mexico and Texas – and over 500 employees.

“I started this business with $500 in my pocket and I survived,” he said. “And I must say that is what makes me the most proud. There are a lot of companies out there who can’t say the same.”

Standing on the stage, ready to accept the Better Business Bureau’s Ethics Award, Dan Swindall turned to BBB president & CEO, Matthew Fehling and said he believed they were the first security company to win the award. “He looked at me and told me that our industry has been a real challenge. That really got my attention. Since that moment, I’ve overhauled my branding.”

Before that moment, Swindall’s goal was to be a solid, dependable security company. Now serving an unprecedented third consecutive term as the chair of the Arizona Private Security Professionals’ Association, Swindall’s goal is to raise the image of the industry as a whole.

“A lot of people don’t know this, but 33 security people died during 9/11,” Swindall said. “They went up those stairs with the police and other first responders – they stuck to their posts and they never came back. And these security personnel go unmentioned without recognition for their valor. That’s why I created the Fallen 33 award. Each year, it goes to our Officer of the Year. It is my way of paying homage to those 33 men and women.”

This lack of recognition is just one side effect of the perception of the industry. According to Swindall, security is right there with the first responders. In fact, they are generally the ones who call the firemen or the police.

“Ethics are big with me,” Swindall said. It is, according to the CEO, the most important trait when looking for managers.

Swindall admits that creating synergy and a team environment across state lines can be challenging. He works hard to make sure that everyone in the company is on the same page. “I have a weekly meeting with all my managers. Whether it’s face-to-face, via telephone or conference call everyone is present. I refer to these as status meetings. Communication is key.”

Twice a year, Swindall also hosts a manager’s summit. They spend a few days together going through training, updates on the industry and a review of technology being implemented. While it’s a great learning experience, the summits are also the opportunity to foster and increase synergy among team members. According to Swindall, “everyone has a great time while they learn.”

“I gotta say, I don’t lose managers,” Swindall said. “Once someone comes on board, they stay. I think that’s a testament to how we deal with each other. Six of the first 10 employees I hired still work for me. They’ve been with me for more than 20 years. In fact, the only way I get to hire new managers is by opening a new office.”

And that’s exactly what Swindall has done, opening three new offices within the past year. The company’s growth landed Blackstone on Inc. Magazine’s list of the 5000 fastest growing private companies in the nation in 2013 and 2014. This also won Blackstone Inc. Magazine’s Hire Power award as one of the most prolific job creators in the country. Blackstone also achieved semifinalist status in 2012 and 2013 for the prestigious Spirit of Enterprise Award given by the W. P. Carey School of Business at Arizona State University.

When asked about his mentors, Swindall looks to his days in the military. He had a supervising sergeant who took him under his wing. It was Swindall’s first time in a leadership capacity, so he took the advice to heart. “I got a lot of common sense direction from him,” he said. “For example, if you need to counsel a manager, you take them to the side and you chat with them. You don’t embarrass them in front of their peers.”

When he returned from overseas, Swindall took a position with Tatt Companies International. With this company he learned the business end of security. After 10 years, the lure of owning his own business enticed Swindall to strike out on his own. It was something he admits he’s wanted since he was a child.

During the past 20 years, Swindall has seen some great success. “We’re self-funded,” he said proudly. “We don’t owe anyone anything. Our growth has been entirely organic.”

As Swindall expands into a new market, he strives to make his business a strong community partner. Each of his managers is required to be a member of a minimum of two organizations of their choosing. “We have to be well-grounded within our community to be effective,” Swindall said.

Looking to the next year, Swindall is proud to say Blackstone is going tech. While security is – according to Swindall – a fundamentally low-tech industry, he is in the process of creating a central command center in Phoenix that will monitor operations companywide. Additionally, Swindall is looking to open a sister company, Blackstone Security Solutions, which is scheduled to launch in 2015. It will be an electronics-based company that provides security components such as access control systems, locking mechanisms, etc.

In looking to the future of the industry and the opportunity to rebrand it, Swindall said the way to achieve success in security is to keep the client happy. “I think greatness is in consistency. We wake up in the morning, drink our coffee, go to work, staff our clients’ job sites, train our employees, laugh, joke and get the job done. Then we wake up the next morning and do it all over again.”