Derrick Hall: Excellence on and Off the Field 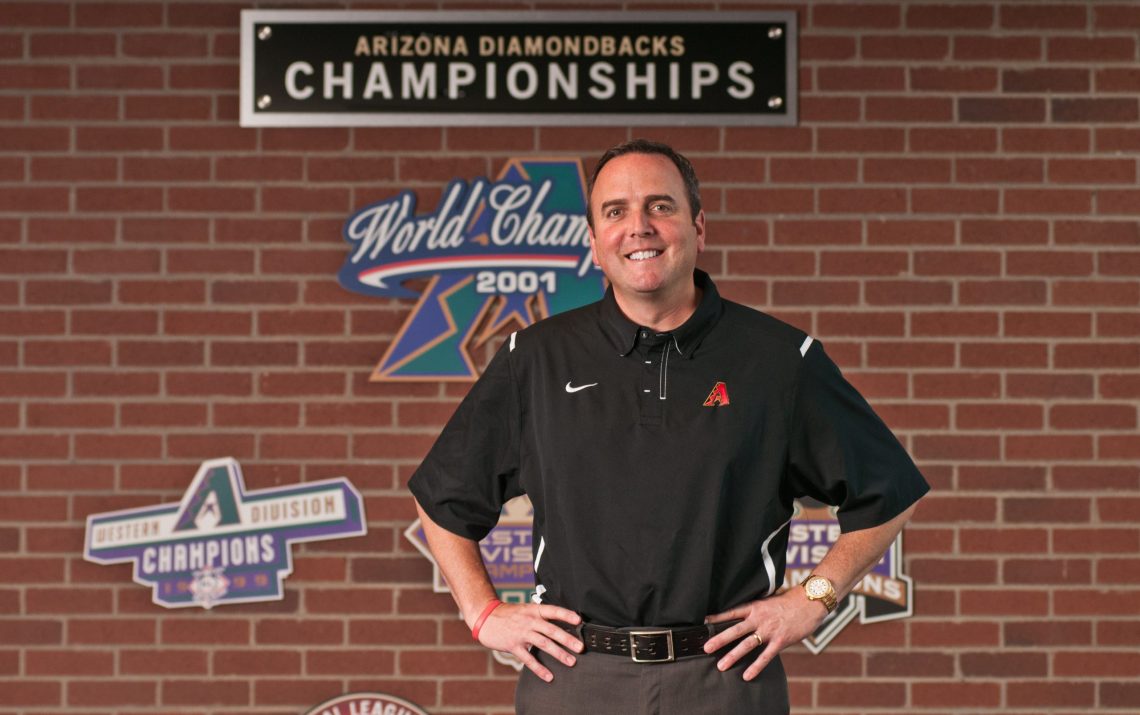 After spending 12 seasons with the Los Angeles Dodgers, Derrick Hall joined the Diamondbacks organization in 2005. He went on to become its president in 2006 and was named CEO in 2009. The D-backs have brought home two National League West Division Championships—one in 2007 and one in 2011—under his leadership. Ranked second in the NL West division this year, the team just completed its second, consecutive 81-81 season.

The D-backs’ win record, however, is just one of the things that Hall is proud of. Off the field, the D-backs are considered the most fan-friendly team in the league. “I couldn’t be prouder of that,” Hall said. “ESPN just ranked us the best team in all of baseball, and number six overall in all of sports. Most of that is based upon the bang for your buck and the way you are treated at a stadium. We won the United Nations NGO Positive Peace Award, as the most positive team in sports. We were the first team ever to win that. I am proudest, overall, of the treatment of our fans.” Among the litany of benefits enjoyed by D-backs fans, Hall named the affordability and safety of the ballpark; allowing fans to bring in their own food and water; and having the most affordable beer in all of baseball.

FAWTSY is a copyrighted acronym that stands for Find A Way To Say Yes. “This is something I stress with all of our staff , whether part-time or staff who interact with our customers everyday. … It is our goal to be the most fan-friendly team in all of sports,” Hall said.

According to Hall, a superlative fan experience begins with an exceptional workplace. “Although customer service comes first, I always say that the customer does not come first, the employee does. If the employee feels appreciated, rewarded, recognized and promoted, then in turn, he or she will treat our fans the way that we expect them to,” Hall said.

It is oft en said that an organization reflects its leadership. The D-backs are no exception. Dedication to employees, fans and community begin with Hall. Hall is committed to a “one fan at a time” philosophy, whereby he personally answers every letter, email or phone call he receives from fans. “I enjoy communicating with the fans. If they are going to take time to let me know how they feel, I need to take the time to respond and let them know that they are appreciated,” Hall said.

The Dodgers culture required that its executives wear suits. When Hall first joined the D-backs, he brought his attire with him. Hall laughingly remembered, “I was wearing a suit when I was sitting in the stands one day. I sit down with the fans because I don’t believe in being in a suite. A woman walked up to me and said, ‘Mr. Hall, you look like an idiot. It’s 110 degrees outside. This is baseball, you’re wearing that, and you’re asking us to buy these shirts, but you don’t even wear them yourself.’ So I thought, boy is she right. This is a great example of listening to your fans and then going back and convincing others that the culture needs to reshape itself,” Hall said. The D-backs did adapt their culture at this fan’s suggestion. “We all love our jobs. We are proud of the brand we have built and we all wear it each and every day.”

“We also understand our social responsibility. We are a major league team that has tremendous resources, and we know the impact that we can have on the community. Since the inception of our franchise 15 years ago, we’ve given over $33 million. We give more back to the community each year than all of the other local sports teams combined. That is only going to continue to grow because we care so much,” Hall said.

“We teach all of our young employees the importance of giving back. That was something that was taught to me very early in my career.” When Hall began his career with the Dodgers, the franchise sponsored a corporate giving campaign. When the team’s owner did not see Hall’s name on the list of contributors, he approached Hall about it. after Hall reminded him that he didn’t make very much, his owner’s response was, “Then don’t give that much.”

“I’ll never forget that,” Hall said. “The lesson is to give something if you can, and that is the attitude we have here. We give time off and paid hours for employees to go work each month for nonprofits and charities.” Every employee is encouraged to serve on boards, or to give time or money to community organizations. “Regardless of how we play, we want our fans to feel proud of this organization.”

The D-backs have pioneered new ways of giving. “We are always challenging our staff to come up with new thoughts and to take risks. Making mistakes is OK if we learn from them,” Hall said.

One employee came up with the idea for the D-back Give Back League. “It is like a fantasy league. Volunteers divide into teams and choose a team name and logo. Each team starts with nothing. Teams pick a charity of their choice and enter into a competition to see who can raise the most money over the course of the year,” Hall explained. At the end, teams give a presentation to their peers, and everyone votes on who has accomplished the most. The winning team, along with a representative from each competing team, gets to go to the Dominican Republic, where the team has an academy, and participate in a community effort there.

In its inaugural year, the organization had 10 teams of about 10 individuals, all serving different causes. Some teams even created their own causes. “after each one of their presentations, there were standing ovations, tears and hugs. It was so difficult to pick a winner….Now we are in year two,” Hall said. after this year, Hall intends to take this program to D-backs corporate partners and other large companies in the area and challenge them to replicate the program. The D-backs organization of 350 employees was able to raise $750,000 for charities in year one. “What would these organizations who employee 3000 or 5000 people be able to do?” Hall asked.

Another innovation led by Hall is the organization’s Circle of Success, which he created in his first year as president. The program focuses on five hallmarks: fan experience, performance, community, culture and financial efficiency. “If we are not focused on these, we are not doing our job,” Hall said. “It is important that all of our employees understand what the Circle of Success means. We have it proudly displayed throughout the hallways, offices and cubicles. Everyone has a pocket version that they carry around along with our values and mission statement. We also recognize people for achieving levels of success within the Circle of Success. … Culture eats strategy for lunch.”

Hall names his father as the person who most influenced his view of business. “He was in the newspaper business. I watched how his employees loved him. When I was in high school, I used to go sit in his office and watch how he interacted with folks. What was important to me was watching him give an employee review. I had always seen him be so positive with his employees. I wanted to see how he could be critical or give advice in a positive way. I was blown away with the human element that enabled him to criticize one of his employees, but his employee was motivated by it,” Hall said. Hall’s father accurately predicted many of his son’s milestone career achievements. Hall remembers the most important career advice that his father gave him, “You need to know everybody’s name and you need to treat everybody with the utmost respect.” Honoring his father’s lesson, Hall makes it a point to know the name of every individual in his organization, from a member of the board, to a person cleaning the stadium.

According to Hall, he has had the privilege of working with several other individuals who positively influenced his leadership style. Hall previously worked with Bruce Karatz, chairman and CEO of KB Homes. “He and I had a terrific relationship. He had a masterful marketing mind,” Hall said. “Our current owner, Ken Kendrick, is a remarkable business mind and has accomplished so much. He is someone I can bounce ideas off , and he has been a business mentor for me.” Baseball commissioner Bud Selig “has been a good friend of mine, and he has taught me a lot about the game and about its history and its fans.”

Hall’s enthusiasm for leading a people-centered organization is manifest in his daily dedication to everyone’s success. The tireless hours and travel keep him running, but he also makes time to include his wife, Amy, and their three children, Logan, Hayden and Kylie in his career. They attend games, spend time in the office and participate in D-backs community service projects together. Hall sums up his business philosophy with this adage, “Love what you do, and you’ll never work a day in your life.”