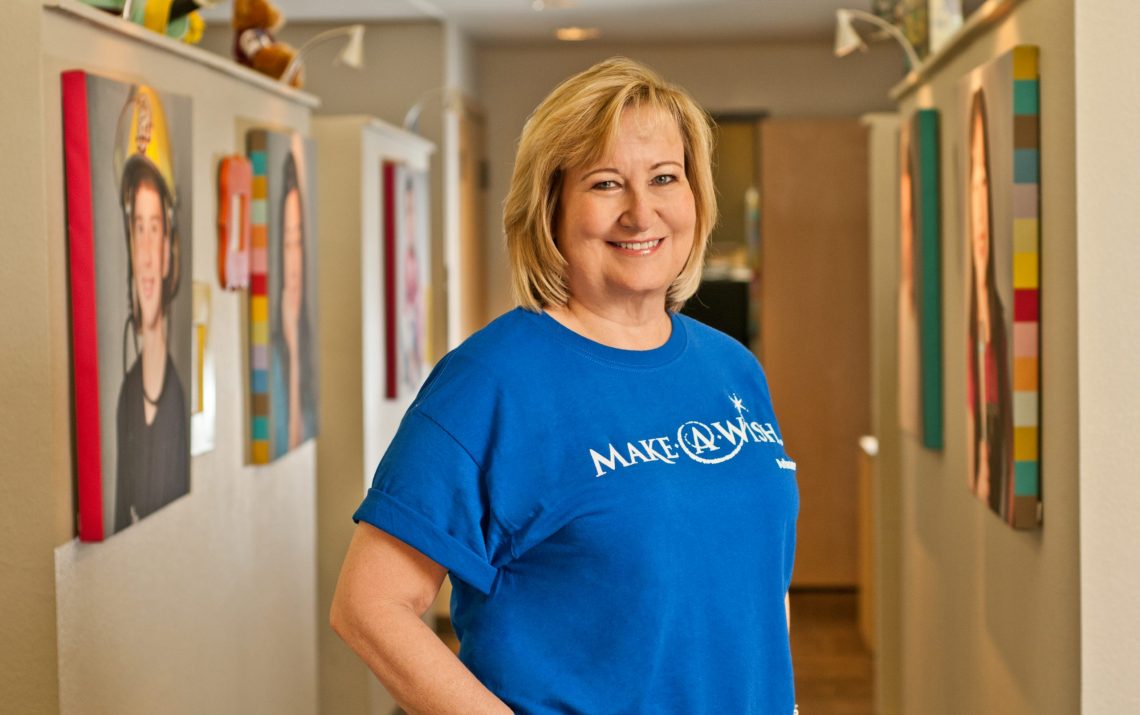 In Elizabeth Reich’s world, strong leadership enables more children with life-threatening medical conditions to receive their one true wish. The president and chief executive officer of Make-A-Wish Arizona has led the organization for more than three years, helping ensure that wishes are granted for at least 300 Arizona children annually. She finds satisfaction in knowing that her leadership is contributing to the organization’s strong impact on children’s lives.

“Some people might think, ‘oh, how nice, you are sending a child to Disneyland,’” she says. “That’s not really all a wish means to our wish kids. The wish is our vehicle, but its true benefit is the impact the wish has on that child’s health, well-being and life going forward. Seventy percent of our children live beyond their illnesses, so the impact really is life-long for them.

“Physicians say the wishes make children more compliant with their protocols, more willing to take their meds or go through chemotherapy,” she continues. “Many have called it the turning point for children in the fight against their illness. Knowing they are going to get a wish, planning the wish and then anticipating it happening is really powerful for our wish kids. We are a positive force at a time in the lives of a family when so much is negative.

“I love this organization and feel like I have worked my entire career to end it with this job,” Reich adds. “This will be my final job; I’m absolutely convinced of it.”

How did Reich achieve the dream of working in a career she truly loves? After earning her bachelor’s degree in political science from Whittier College in Southern California, she worked in retail and then banking. Shortly after moving with her husband and two young sons from the Golden State to Arizona, she found out she was pregnant with a third child.

With three boys under the age of 5 at home, finding a job was difficult. Instead, Reich began actively volunteering for a variety of community organizations.

“When it was time to go back to work I went back into banking,” she says. “I wasn’t happy and I realized my volunteer life gave me more satisfaction than my professional life.” Reich had been through a leadership training program and one of the things she did in the program was shadow a hospital executive.

“I thought working in health care looked like a great way to help people, so I called a friend who worked for a hospital,” she says. “My friend very kindly reminded me that I had no clinical experience and no business experience related to health care, so I was not a great fit.’”

Luckily, a hospital administrator she had worked with on a volunteer committee for a fundraiser overheard her on the phone and offered her a role completely new in the hospital environment.

Reich went to work for the then Lutheran Healthcare Network, running their community-based programs. It was one of the largest departments, with 60 nurses and more than 14 psychologists. She stayed with the departments for 10 months before transitioning to director of Women and Children’s Services, where she oversaw the creation of the Southwest’s first hospital-based, outpatient women’s health center for 12 years.

Her next leadership role was working for Arizona Gov. Jane Dee Hull, as executive director of what is now called The Governor’s Office for Children, Youth and Families. Reich notes that similar to when she began working at the hospital, she didn’t have a background in her new area.

“I really didn’t know government, but I did know the issues, mostly from my volunteer work,” Reich says. “I had served on boards of nonprofits that dealt with those issues, so was qualified mostly as a result of volunteering.”

Several high-level leadership roles followed prior to coming to Make-A-Wish Arizona, where she leads an office staff of approximately 25 and is responsible for the activities of 600 volunteers throughout the state. Previous positions included overseeing all fundraising activities at two Banner Health hospitals; serving as CEO of VisionQuest 20/20, a nonprofit organization dedicated to establishing a national vision screening program for school children; and, acting as vice president of advancement for Childhelp, which provides assistance for victims of child abuse.

To achieve success at the organizations she has overseen, Reich employs a leadership style based on trust and honesty.

“I have become a new convert to the Five Dysfunctions of a Team way of leading,” she says. “The most basic requirement is trust within an organization and that starts with the leadership. Then healthy conflict has to exist so the team can come to the right decisions and move the organization forward. I believe in saying what I am going to do and doing what I say. I also believe in leading by example, so I don’t ask other people to do things I wouldn’t do.

“At Make-A-Wish Arizona we operate following a set of team norms, which are, essentially, our rules of engagement,” she continues. “Our norms say that we treat each other with respect, meaning we are open and honest in our communications. It is a pretty straightforward way of operating.”

Her style developed and continues to develop by watching and learning from others, both the good and the bad.

“You learn from both if you are smart,” she says. “I grew up in a family full of men. I have three brothers and three sons. My mother is the only woman I have ever lived with, so women friends are really important to me and I have women friends who are very successful. I am always quick to reach out to others for advice and counsel when I can’t seem to get out of the weeds to figure out what to do. I’ve also had mentors by bad example, who demonstrated to me the exact wrong thing to do and I said to myself, I will never do this. I have had bad bosses who have taught me how never to treat an employee.

“There are a lot of unpleasant leaders who are really successful, but that wouldn’t work for me,” she continues. “I think you have to be somebody people enjoy being around.”

There are many leaders Reich admires. She calls her parents her “leaders and mentors.” Her father, John Rhodes, was a member of Congress from Arizona for 30 years, seven of them as House Minority Leader. It was he, the Republican leader in Congress, who went to the White House on August 7, 1974, to tell President Richard M. Nixon that he was going to vote for impeachment. The next day the President resigned. Watching her father put his country above his party was a brave stand and the most admirable example of leadership she has seen, she says, adding, “I wish today’s elected leaders would follow his example.”

Reich likes what Bill and Melinda Gates have done related to philanthropy. A leader she strongly respects is the late Nelson Mandela.

“What I admire most about him is that he had a great opportunity to get back at the people who imprisoned him, but instead he preached forgiveness,” she says. “What a great example for all of us to follow.”

She distinguishes leaders as visionaries who others want to follow, versus people who merely manage.

“A leader sets the vision and the end game and then hires the right people and trusts them to get there on their own,” she says.

To aspiring leaders, Reich counsels, “Keep your eyes open and stay true to your values. Learn how to confront difficult situations in a way that maintains the relationship and benefits both parties in the end. I learned early in my career that when you are having a tough discussion with someone you should be direct, you should be specific and you should be non-punishing. Also, I think we have lost the art of discussion in a texting world. So I regularly tell my staff to get up off your chair and go talk to somebody; don’t send them an email, have face-to-face conversations.”

With five grandchildren, many friends and a love of travel—Reich and her husband, Frank, just returned from South Africa—theater, reading, knitting and cooking, Reich is passionate about her career, but is not consumed by it. She strives to keep her life balanced.

“My husband and I work hard at making sure that when one of us is stressed, the other one finds a way to become less busy at work or step in and handle things,” Reich says. “It is a partnership with my husband. We are both in pretty high-powered careers and we work hard to communicate with each other about what is coming up, where we need to be and what needs to happen. It has worked well for 38 years. I also give myself permission to let some things go and I’ve learned to say ‘no, I can’t do that.’ You have to be honest with people.

“I adore my job but I know that 10 seconds after I’ve left it, the focus will be on life after me,” she says. “With my family, 10 years after I leave they are still going to be missing me. And that is what is most important: the people you love. It is your family, your friends and your faith; you manage your job around them. Our three sons, their wives and our grandchildren are the most important legacy I will leave.”

Vicki Hogue-Davies is a freelance writer and has been a contributing writer for C-Level Magazine for more than three years.