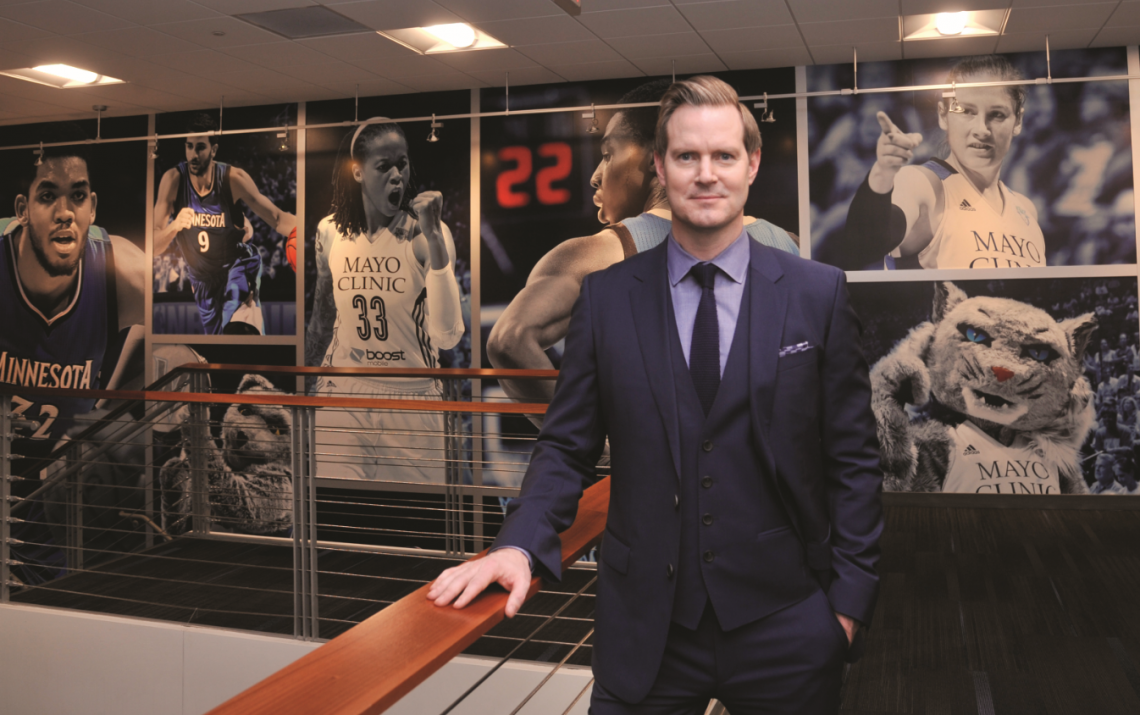 “When you put aside the wins and losses and the emotional ups and downs that sports teams and fans go through, what makes it all so beautiful is that every year you start out undefeated.”

It is with this winning spirit that Ethan Casson has begun his season as CEO of the Minnesota Timberwolves NBA and Minnesota Lynx WNBA teams, and he considers it a sacred trust to stir belief, inspiration and unity among the people he leads and serves.

“I think sports is representative of our society and culture,” he continued. “Sports is something that brings people together and there is something so pure about that. For me to experience this in such a remarkable market where I have a history and connection to the team is incredible.”

For Casson, life has indeed come full circle. He grew up on the East Coast and has been a sports enthusiast for as long as he can remember. He played college basketball while earning his degree in sports management from Colby-Sawyer College in New Hampshire. Although he was a talented athlete and later inducted into both the New England Basketball Hall of Fame and the Colby-Sawyer College Athletic Hall of Fame, he said he eventually realized that “extending my playing career was not a reality, so I framed my education around integrating sports and business. That’s what led me to the college I chose.”

University programs specializing in sports management were not so available then as they are today, and internships were few. That did not deter Casson from pursuing his dreams. “I decided to pursue as many internships as possible. The most impressionable experience was with the Boston Celtics; a lifelong Celtics fan, I had the opportunity to see the inner workings of one of the most successful franchises in sports and I was hooked.”

Casson then entered a job market where opportunities were also limited. Intrepid as always, he began a stalwart campaign of cold-calling teams and sending out resumes. After a brief stint at ESPN, a cold call to the human resources director of the Minnesota Timberwolves yielded an interview, and he was offered an entry-level position. He sold everything he owned and set out for the unknown reaches of Minnesota. Nobody imagined then that the organization had just begun grooming its future leader.

Casson spent the next 11 years with the Timberwolves and Lynx, working his way up through the ranks to senior vice president of corporate sales and service. Then in 2010, he was invited to join the San Francisco 49ers organization. “At that stage of my career, I was ready for a new challenge, something that would take me out of my comfort zone. Leaving was as much about the evolution of me as a leader as anything else. I joined their business team as an executive to help build the new football stadium.”

During Casson’s tenure, the 49ers built the most technologically advanced stadium in the world, Levi’s Stadium. Casson’s dynamic leadership led to significant revenue growth, as he was instrumental in negotiating an unprecedented 20-year, $220 million naming rights partnership with Levi Strauss & Co. and in securing coveted sports and entertainment events, including Super Bowl 50 in 2016. “It was an incredible six years, and in many ways, was what I needed to experience. The successes and adversity prepared me for what was to come.”

What came next was a chance meeting with Timberwolves and Lynx owner, Glen Taylor. “We talked about the current state of the organization and his vision for the future.” Months later, Casson visited with the owner at his home in Mankato and the opportunity of CEO was introduced.

“My wife is from the Twin Cities and has family here, making a return to Minnesota very appealing. And the idea of coming back to the organization I started in 18 years ago was special to me.”

Casson officially began as CEO in August 2016 and he took a studied approach to leadership, spending the first few months observing and listening, getting a feel for the staff and current state of the business. “Over the last month or so, I’ve started to implement an appropriate business strategy,” he said. “I’ve thought a lot about the direction I want to take our franchise, our culture. From my position, I want a staff that is inspired and believes in achieving great things, one that stimulates our fan base and community. I want to lead an organization that is relentless in everything we do.”

Casson’s own relentless positivity and pursuit of excellence are an inspiration to the 140 team members he leads. “I often talk about how fortunate we are to do what we do. Our responsibility is so much bigger than just a job. Regardless of career stage, I want to hire people who embrace that mindset and live it every day.”

Minnesota’s professional sports landscape is one of the most competitive in the country. Fighting for a voice in the market, growing your fan base and garnering corporate support is no small feat. Casson is fully aware of this reality and is up for the challenge. “I understand the work and patience required to build a sustainable business, and I’m confident we will take the necessary steps to get there.”

One step toward this vision came when the organization announced its alliance with five Founding Partners, corporations that will both partner with the teams and establish a significant presence inside the newly renovated Target Center. These partners include U.S. Bank, Treasure Island Resort & Casino, Federated Insurance, Jack Link’s and TCL. “We think these are tremendous brands to be associated with, like-minded companies looking for opportunities to engage with our fans.”

Along with these five long-term partners, the Timberwolves and Lynx have naming rights relationships with Target Corporation (Arena) and Mayo Clinic (Training Facility). “We recently built an incredible training facility in Mayo Clinic Square, far and away one of the most integrated sports training facilities I’ve ever seen. The practice facilities for our teams are here along with our business offices, and our technology applications are absolutely state of the art.”

As Target Center moves into the second stage of its renovation, it is on track to reestablish itself as one of the nation’s premier sport and entertainment venues; it promises to enhance the overall fan experience, while bringing a renewed vibrancy to downtown Minneapolis.

The NBA is introducing another innovative corporate sponsorship opportunity, the jersey patch, like that already seen in the WNBA, MLS and NASCAR. Beginning with the 2017-18 season, teams will be allowed to have an advertising patch on all home and away jerseys, ultimately providing a partner with an incredible amount of exposure. “Imagine the impressions this piece of inventory represents when you consider the number of games that are nationally and internationally televised. Undoubtedly, this is a global opportunity.”

Further on the international front, the Timberwolves are the first NBA team to sell minority shares to a Chinese citizen. Lizhang Jiang, founder of Double-Edge Sports, joined the organization this past summer as a new limited partner. “I’m excited to be working with Jiang and his team on potential business opportunities. China continues to be a huge growth opportunity for the NBA and the league’s popularity is second to none.”

At home, the organization is committed to initiatives that bring greater diversity to the sport and its business operations. Casson is responsible for the launch of a new fellowship program for female college graduates to include eight, six-week rotations inside marketing, public relations, ticket sales, membership services, corporate partnership sales, corporate partnership activation, business intelligence and live programming and entertainment. “There is no doubt diversity makes us stronger as an organization. This is reflected in the inclusive way we lead and our efforts to recruit, develop and retain a diverse workforce. The fellowships will allow women to experience areas of the organization and possibly see themselves in a sports career. We’ve already seen a strong interest in being a part of it.”

“I still wake up every day as motivated as I was 20 years ago. I have the same urgency as the kid who asked, ‘What if?’ Minnesota is a tremendous basketball state, which can be seen by the number of kids playing at the youth level. We need to tap into that affinity and connect them to our franchises. Our Lynx team has seen remarkable success the last five years. Our Wolves team has a young nucleus of players on the rise. We are committed to cultivating an environment where we are best-in-class in everything we do; an environment where we are not solely defined by wins and losses on the court but by the difference we make off it.”

Prominently displayed inside the Timberwolves and Lynx business offices is the slogan: “Believe. Inspire. Unite.” No words could more appropriately describe Casson’s journey.