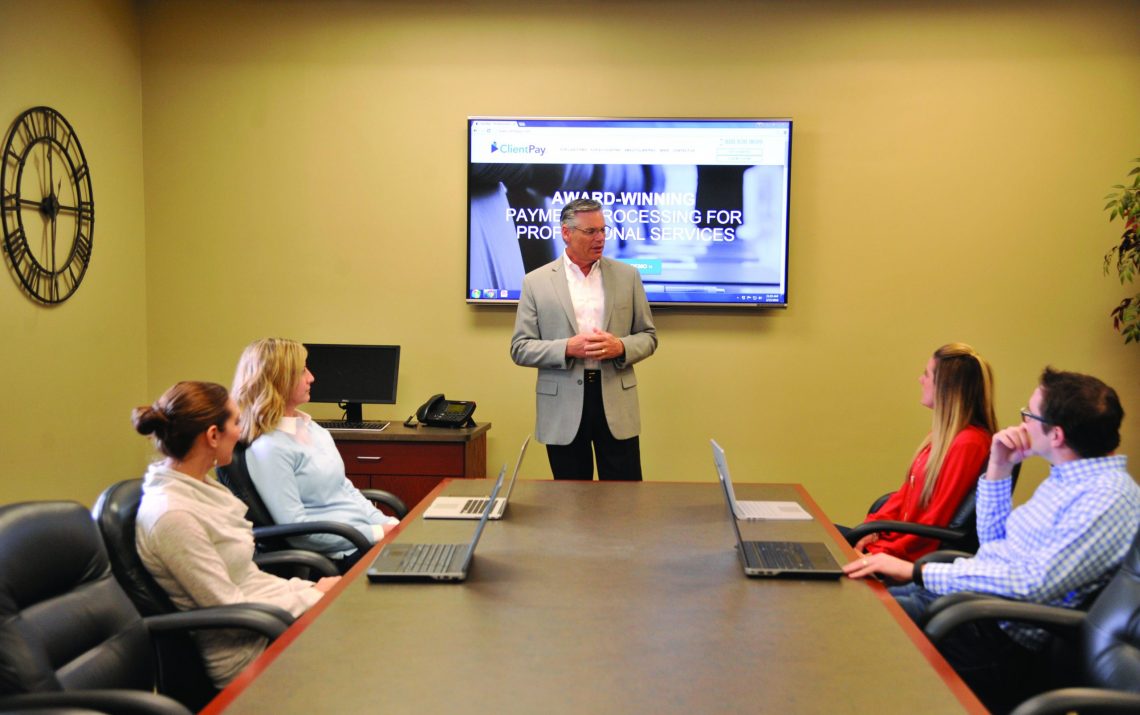 What does it take to turn a family-owned business into an industry leader? In one word, it’s culture.

Persolvent has been an innovator in the payment processing industry for over 20 years. When it began in 1992, it was one of the first online payment processing businesses in the nation. It has since developed into a tech powerhouse, recognized as an industry pacesetter. It has won numerous awards for innovation, including the 2013 Minnesota High Tech Association’s Tekne Award for ClientPay, a product developed in collaboration with legal services giant Thomson Reuters.

Persolvent CEO Jay Bruber is a lifelong entrepreneur, who brought his penchant for original technologies to Persolvent, embraced the Internet’s brave new world, and catapulted the company to the forefront of the industry. But he is also the company’s culture keeper. Some would say the term culture, as it pertains to business, has become cliché. However, Bruber believes that being an industry leader in technology and customer service requires putting the right people in the right seats. And to accomplish that, someone must take responsibility for defining the activities, beliefs and behavior that characterize Persolvent.

Words to Live By

Bruber and the other owners of Persolvent, which include his sister and founder of the company, President Julie Bruber, and his nephew, COO Vince Arnoldi, joined together years ago to craft a fresh mission statement and define their core values. What they came up with has led to a company with almost zero attrition, a rapidly growing market share in several verticals, and a wide net of satisfied clients across the country.

“First we agreed upon having a really strong mission statement that we could rally everybody around,” Bruber said. “That mission is ‘to make life easier through innovation and technology,’ and our goal is ‘to earn the right to be recommended.’”

But Bruber explained that they didn’t stop with merely crafting a set of words to classify company values; they went on to imbue these words with meaning. That was the tipping point between idea and action.

“In our company, we don’t just say our core values. We talk about what they mean so people know how to behave. For each value, we have four or five bullet points that describe its meaning. For instance, being professional means treating others with dignity and respect. It means projecting a positive attitude, and using please and thank you. These are the attributes of our corporate culture.”

Inspiring a team of people to make the lives of others “easier through innovation and technology,” requires the creation of a forward-thinking work environment that also makes the lives of team members easier, their jobs more pleasant, and their purposes sharper. The next step is finding the people who embrace that culture with heart. “Hiring people who fit in our culture is a number one priority for our company. I do all the hiring. People say, ‘You’re the CEO. You should have an HR department.’ I have one, but I still hire everybody here. There are only 30 people, and each one is handpicked. Two things are of the highest importance to me: What activities can you be passionate about? And do you behaviorally fit into our culture and expressing our core values?”

Bruber and the Persolvent leadership team have created a process that encourages team members to do the things about which they are most passionate. “You can’t manage passion, but you can manage the activities people do that they can get passionate about,” Bruber said.

Bruber explained that Persolvent operates on the idea that “there are things we love to do and think about, and those are the first things we usually get done. We want our team spending 80 percent or more of their time doing what they love to do. The other 20 percent are the things we put off until someone forces us to get them done. We want to know what those are, too.

As a whole, the company operates at a 95/5 passion ratio. Each team member is asked to report and categorize their activities quarterly, and efforts are made to either automate or reassign tasks they’re not feeling passionate about. “That’s how we’ve learned to leverage passion. It’s a great competitive advantage for us over other companies and it allows us to have a flatter organization.”

The process is also enhanced by a work environment that promotes balance. The company has a sports facility on site, where team members can take a break during the day and walk around the gym or play a game of ping pong, pool or basketball. The group plays volleyball together once a week. Bruber says that one of the down sides of having a job you love is not knowing when to take a break. “We try to focus on having work/life balance. Sometimes you need to get away and think about something else.”

What’s in a Name?

In a company where words have meaning, the ideas and expectations conveyed by the corporate name are also of chief importance. In 2015, Bruber felt the need to rebrand with a name that more accurately reflects the company’s commitment to innovation and service.

“We simply outgrew our previous name, BankCard Services Worldwide. When the company started, we worked primarily with banks and credit unions. Over time, we developed our e-commerce platform, and now we serve a number of different business verticals with our technology.”

So Bruber called upon the passion and creativity of his team to solve the problem. “The word ‘bank’ has come to mean regulated and slow in our society. It didn’t say tech, and we’re a technology company first. So we did a naming contest. We offered a thousand dollars to any team member who could come up with a name that incorporated technology, speed and making life easier. Persolvent came out of that. In Latin it has the connotation of ‘getting paid.’ The word ‘solve’ is there, and to ‘be solvent.’ We loved it. Then we hired Twin Cities advertising agency Periscope to put a logo around it, and they fell in love with it too.”

When Bruber was in his early 20s and running his first company, his father asked him, “How much are you giving to charity?”

“At the time, I wasn’t giving any,” Bruber said. “My father said, ‘Well, you better think about course correcting before the Lord decides for you. You might not like how he does it.’ That business ended when an explosion took out the building I owned. Fortunately, nobody was injured in the incident, but the insurance didn’t cover it, and I lost everything. I learned from that experience, and charity has been a core value ever since.”

Bruber also owns a successful food distribution company called Simek’s with his daughter, Lindsey Bruber-Hickey and his wife, Laurie Bruber. Together with Persolvent, each company donates 10 percent of pre-tax profits to charity each month. It is also an opportunity for team members to bond in service to others. “We love helping those in need, whether it is feeding the poor or working with people with disabilities. It fits with our mission of trying to make people’s lives easier. I also like to challenge other companies to do the same thing, like my father challenged me. It’s not for publicity. I think it’s part of being a business leader. When you take on the responsibility of building a company, you also need to be thankful and give back.”

Persolvent is also starting a new division where 50 percent of the profits will go to charity. Jay’s youngest daughter, Ashley Bruber, will be the general manager of that new division, Payments for Change.

Persolvent’s success springs from its culture, one that is clearly defined by its leadership. Jay Bruber has built more than one successful company by listening to the needs and ideas of customers and team members. He is aligned in his dedication to family, faith and community. He is the culture keeper, and the visionary leader of a little society called Persolvent.