Jerry Colangelo: A Team Player for the Community 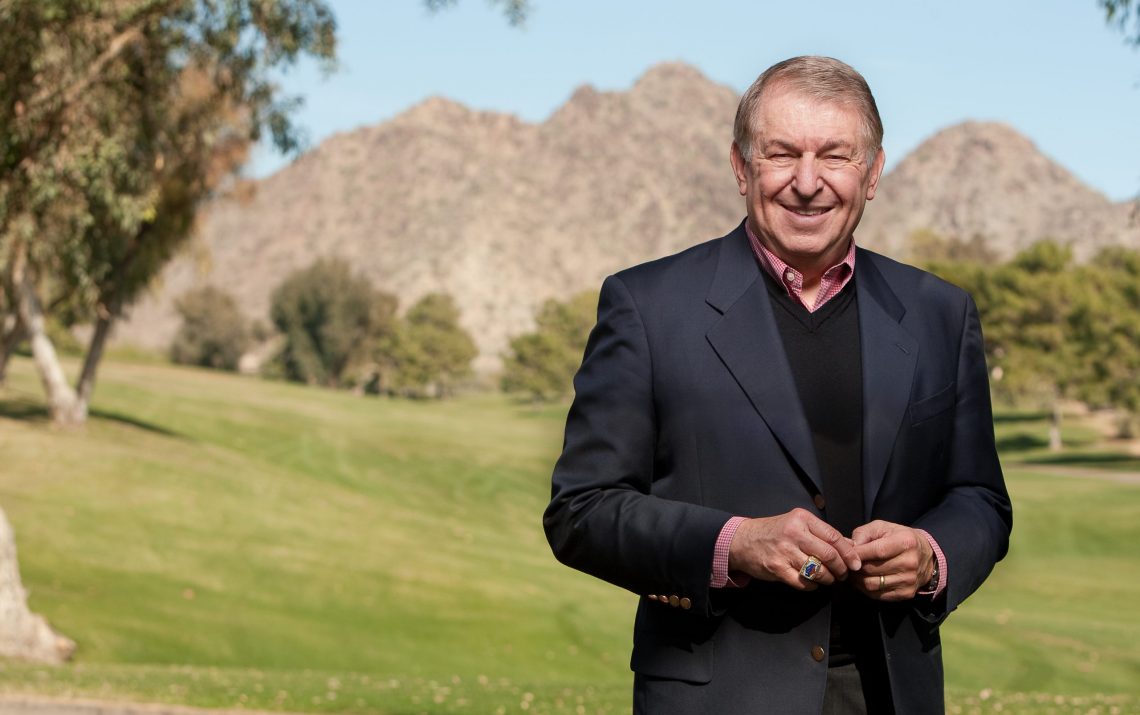 Growing up in Hungry Hill on the Southside of Chicago, Jerry Colangelo and the rest of the neighborhood kids admired Frank Sinatra and Joe DiMaggio. It was Colangelo’s coaches, however, who most influenced him. “My competitive edge in sports has always driven me,” says Colangelo. It led to him making All-State in basketball, to him receiving sixty-six college offers, to his involvement in professional sports and what brought him to Phoenix as the general manager of the Phoenix Suns.

Colangelo prides himself on the four and half decades spent in the rough world of professional sports. “I did it all on a handshake. I had a reputation. People trusted me and players wanted to play for me,” says Colangelo.

“It’s important to be a person of integrity through adherence to moral and ethical standards. If people look upon you as someone with integrity, then that opens so many doors,” says Colangelo. Leaders are always under a microscope, so “you can’t just talk it, you have to walk it.” If a leader does not constantly present an image of respectability, then a tint of falsehood can stain their reputation.

“This was not all by design,” says Colangelo. “That’s just who I am.” He naturally projects a sense of integrity, which has aided him in all his endeavors. “People need to be who they are,” which may not be the ideal image of a leader. If, however, they pay their dues and conduct themselves with “elegance, class and integrity, then they have a chance to be successful.”

Surround Yourself With Better Men

Jerry Colangelo looks back on his success and knows for certain that one of the key ingredients was the men and women he surrounded himself with. “When you build a company, you need to surround yourself with good, smart people—maybe smarter people than you are,” says Colangelo. In all of his organizations, he strived to build a team. According to Colangelo, It’s not something you can wake up and decide to do. If, however, the leader offers each team member respect, then the leader can earn their mutual respect.

With the management team, this endeavor becomes more essential. “Surround yourself with people who don’t have bad habits,” advises Colangelo. In his businesses, he trains his management team and, as they earn his respect, he gives them room to grow. “I made my share of mistakes, and I learned from them,” says Colangelo. He gives his team the same opportunity. By giving them space, he not only offers them the chance to err and grow, but the chance to become the people they can be.

“Life is relational,” says Colangelo. “Most everything we do, the decisions we make, are tied to our relationships. The most important thing someone can do in the business world is to develop those relationships.” In the old days, as Colangelo called them, people built their Rolodex. Now, people need to develop their email and iPhone contact list. While some people dread networking, Colangelo knows that it is an integral part of building a successful foundation. “You never know when a relationship is going to reappear in a business or some other setting.”

Be Willing To Risk Everything Or Gain Nothing

Colangelo remembers an “old-timer in my neighborhood. He was an immigrant from the old country.” He liked Colangelo and took him outside one night and pointed at a star in the sky. Once Colangelo was able to locate the star, the old man told him, “remember, it’s better to be on that star for one day, then to never get there at all.” For most of his life, that quote has been a part of him.

There are many attributes, many ingredients in a success story. And while there is no secret formula that guarantees the success of a business, there are destabilizing traits. “Quite often, people have a lot going for them,” says Colangelo, “but they’re not willing to take that extra step, that calculated risk. You must be willing to do that.” In 1987, Colangelo was in a position to buy the Phoenix Suns. The asking price was 44 million dollars. It was the most anyone had ever paid for a basketball franchise at that point in time. People were shocked when he chose to move forward with the deal. “All I ever wanted was the opportunity to have it,” says Colangelo of the Suns. “It was up to me to make it happen.”

While every entrepreneur, every executive needs to be able to make a calculated risk, they need to know their boundaries. In his many years in the professional world, Colangelo has seen many successes, many almost successes and some failures. In his eyes, most people make mistakes when they step away from what they know. “Quite often, when people venture too far from their comfort zone, their sphere of influence and knowledge” that’s when they make a mistake. “In my lifetime,” says Colangelo, “my success is geared toward the space that I know well. When I ventured out into a space where I’m not as experienced, that’s where I made mistakes.”

“You’re going to make bad decisions,” says Colangelo. “It’s inevitable.” The best way to try to avoid them, however, is by being prepared. “As I reflect back on the decisions I wish I could do over again, most of them were from shooting from the hip. Not doing the due diligence required. When you jump the gun without being prepared, there are risks.”

As any entrepreneur starts out, they need to build a foundation. “There are very few shortcuts in life, so the quick, easy fix attitude usually has a lot of pitfalls. Rome was not built in a day, neither is a business,” says Colangelo. He does believe, however, that with these five things, an entrepreneur has a good chance to succeed:

Remember The Community & Yourself

During his first Phoenix press conference in 1968, Colangelo said, “this community owes us nothing. We need to earn the respect of this community by our conduct on and off the court and by our contribution to it.” Since his arrival, he has made it one of his goals to develop and grow Phoenix. According to Colangelo, it should be the goal of every man and woman to improve their town. They should strive to “make the community a better place to live, not only for themselves and their family, but for all future generations. Many people are willing to do their part, but I encourage them to do more than that.”

To this day, despite his commitments, he never loses sight of the community. In fact, he is still as connected to his hometown as ever. “I’ve never forgotten who I am or where I came from,” says Colangelo. While his career has taken him far beyond the streets of Hungry Hill, he does not forget his family or his Italian roots. “I have always felt that I have vicariously represented them all.” When he goes back home, the house his father built, the street he played on as a child and the gym where he played basketball are all still there. The surreal aspect of his life is the plaque in front of his home, labeling it as his childhood home, the road sign dubbing his street “Jerry Colangelo Way” and the gym named after him.

While Colangelo is proud to represent Chicago and his family and Phoenix, his proudest moment was being able to represent America. “Everyone should feel blessed that they were born or live in this country, where the sky is the limit.” “I’ve been very blessed,” says Colangelo. “I’ve had some great moments.” The opportunity to represent our country on the international stage in Bejing when we won the gold medal was his proudest moment. “It was more than a high school, a college, a state—this was representing my country,” says Colangelo.

As Phoenix has grown, Colangelo is proud to see roots growing. When he first arrived in this transient community, most people were “just here for a cup of coffee.” He is honored to say that, “there are now three generations of Suns fans.” As Phoenix continues to establish itself as a permanent home to the melting pot of newcomers, Colangelo welcomes the opportunity to expand one of the fastest growing cities in the country.

“My partners and I have been in business for 35 years. We are the largest landowners in the state,” says Colangelo of his partnership with JDM Partners. They have entitlements to build a city of 300,000 people. It will have 110,000 homes, 60 million square feet of commercial buildings and a park larger than Central Park.

Colangelo and his partners are also involved in the Interstate 11 project, which will build a freeway from West Phoenix to Las Vegas. This interstate will be one leg of the Canada-Mexico Corridor.

In addition to his real estate endeavors, Colangelo hopes to bring the USA Basketball team headquarters to Phoenix. Every other national team has their own space; Colangelo would like to give that to our team as well. They are currently located in Colorado Springs.

Colangelo and his partners continue to contribute to the Phoenix community. After more than forty years, Colangelo is still making good on his promise to earn the respect of the community and to make it a better home for our generation and the generations to come.