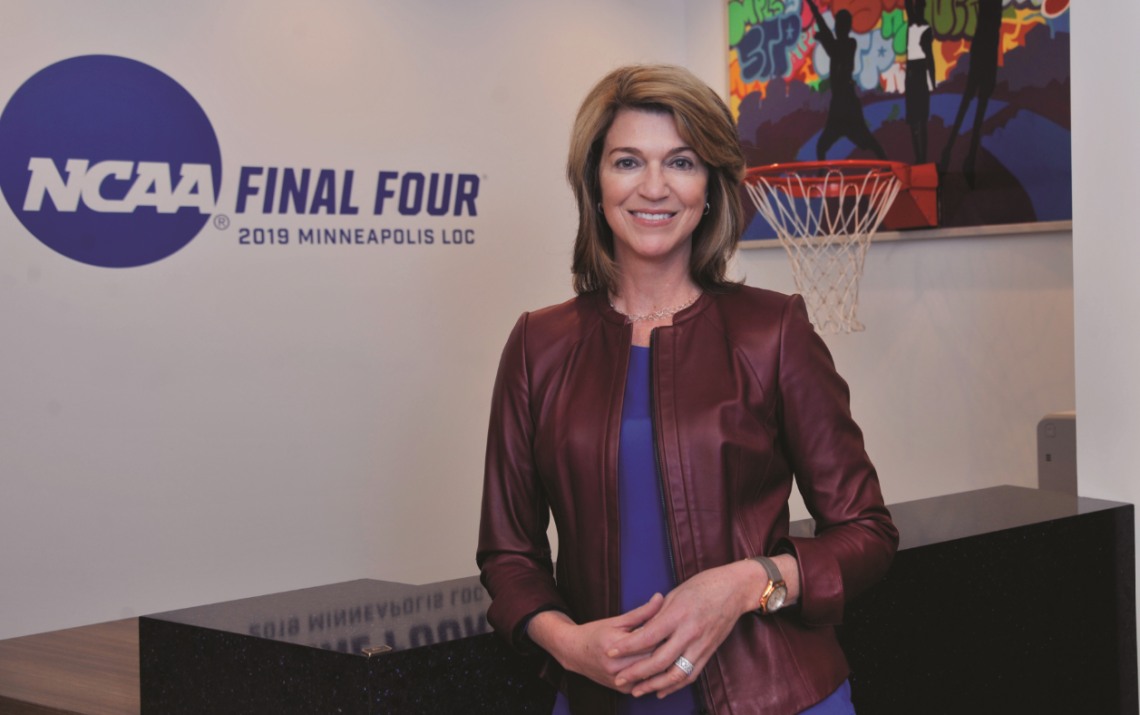 Something momentous is going to happen in Minneapolis between April 5 and April 8, 2019. During those days, the NCAA’s Final Four games and related events will take place at the new $1.1 billion U.S. Bank Stadium downtown.

“The team gathered at the University of Minnesota to watch a live broadcast of the decision. It was one of the few times in my life when I wasn’t sure what was going to happen next. It was incredibly exhilarating.”

Kate Mortenson, president and CEO of the Minneapolis Final Four Local Organizing Committee (MLOC) envisions something even bigger. She sees an opportunity to welcome the world to the Minneapolis-St. Paul region and bring people together to celebrate this extraordinary moment in basketball. She wants you to know, that whoever you are and wherever you are from, she’s saving you a seat.

“We want people to know that the Final Four involves events that are accessible to everyone,” Mortenson said. “We’re developing this project with a vision of inclusion that will only come about by working with and through other people. The leaders in our community are committed to showing up and doing whatever is required to assure that we deliver this event with excellence, keep the cost low and the impact high. As we build out our organization, our focus is on excellent results and inclusion in the process. With the Final Four, we see a special opportunity to leverage and highlight the talents of professionals of color in a region where many people don’t realize we’re as diverse as we are.”

Cosmopolitan Minneapolis provides a compact urban footprint that NCAA fans will love from the time they step off the plane. The tournament and related events, which will include a three-day music festival and a fan fest at the convention center, will all be within walkable distance of each other and downtown’s premium accommodations and eateries. The world-class U.S. Bank Stadium is a destination unto itself, with state-of-the-art amenities and a venue that will expand to seat a crowd of more than 75,000 spectators.

Bringing Her World View Into Focus
According to Mortenson, she has always had a global view and a “desire to be in the swim of humanity.” An East Coast native who earned her degree in broadcast journalism from Boston University, Mortenson began her career unconventionally, serving in the United States Peace Corps for three years in the Comoros Islands, located off the East Coast of Africa. “Out of college, I wanted a job that wasn’t narrowly defined or based in a cubicle. The Peace Corps was a great way to burst out into the larger world and challenge myself.”

Looking back, Mortenson said the skills she acquired there translate well to the work she is doing today. “That experience was an early foray into learning how to lay out a vision, chart a course, gain buy-in and work through influence to make things happen. I learned to look around and ask, what can you make out of what you have around you in terms of resources? Although the community impact work I do now is on a different scale and in a different place, it’s still based on a strategy that involves working across sectors to assure we get to that double bottom line of economic benefit and social benefit.”

Following her stint in the Peace Corps, Mortenson was hired by Conus Communications, a news division of the Minneapolis ABC affiliate Hubbard Broadcasting. Energized by the unusual work hours and challenging nature of television news, she was soon promoted from an overnight associate producer shift, to producer, then managing editor. After marrying her spouse, David, his family’s business opportunities took them to various destinations, including Ireland. Wherever she was in the world, Mortenson plugged into the community and made a difference through grassroots advocacy work.

“Over the years, I’ve been fortunate to work on increasingly complex projects, which involve significant fundraising, coordination of volunteer efforts and buy-in from government, business and community interests to achieve common goals. When we returned to Minnesota in 2006, I went deep with interests in the community in a way which gave me the experience I needed to have this opportunity with the NCAA Final Four.”

Surprisingly, this adventurous woman leader said she doesn’t think of herself as a risk-taker. “The thought of hosting a dinner party can actually make me a little nervous. But when it comes to showing up for the community,” she said, “for some reason I always have my crash helmet on, ready to ‘Go big’.”

That’s exactly what Mortenson did when she was asked to serve as bid director for the Men’s Final Four, a five-month campaign leading a cross-sector team from the finalist phase through selection. During those five months, she worked in robust collaboration with numerous organizations, including three key partners – the University of Minnesota, the Minnesota Sports Facilities Authority, and Meet Minneapolis/ Sports Minneapolis, the city Convention and Visitors Bureau. The goal was to cultivate a winning relationship with the NCAA and be named a future host city for the Final Four.

Minneapolis was one of eight cities selected as a finalist for four years of games to be awarded, and Mortenson recalled the moment of truth. “The team gathered at the University of Minnesota to watch a live broadcast of the decision. It was one of the few times in my life when I wasn’t sure what was going to happen next. It was incredibly exhilarating. After we were named as the host city for 2019, the steering leaders from the bid came back and asked me to stay on and lead the local organizing committee.”

Coordinating a Community Vision
That’s when Mortenson’s real work began. With the team, she started by laying out the vision of delivering the Final Four with excellence and distinction, while earning future opportunities and having a lasting positive impact on the local community. Working in conjunction with the event’s host institution, the University of Minnesota, as well as representatives from U.S. Bank Stadium and Meet Minneapolis, Mortenson has sought to create an infrastructure that is “horizontal versus vertical. If we hope to repeat this event every five to seven years, we need to organize in such a way that the knowledge and capacity remains after 2019.” Cost considerations also inform the collaborative approach, and Mortenson is relying on the partners, along with a small hired team, to establish a model that is “high impact, low cost, repeatable and intentional in its design.”

Mortenson’s vision for the event impact is comprised of three primary dynamics. First, economic benefit. The 2019 Final Four will bring an estimated $70 million to $100 million into the Minneapolis- St. Paul region and will put the city in the world spotlight, encouraging investment in future events.

Second, diversity and inclusion. The tournament poses a unique opportunity to demonstrate unprecedented inclusion by engaging the talents of local professionals of color throughout the operation, and by inviting diverse sectors of the community to attend. “There will be inclusion in terms of how the event is planned and executed, and also in the many free and low-cost events offered to the community. The organizing committee will make an authentic invitation through focused outreach activities across the region. Attendance across events associated with the Final Four is an important measure of our success. We want that attendance to be reflective of the global city we really are.” To achieve inclusion and event impact goals, Mortenson references the first committee established to advise the host effort, the Impact Advisory Council, meeting regularly since August 2016.

Third, is a commitment to youth. A sustained, educational outreach to youth in area schools is being initiated, laying out goals and incentives, and then celebrating achievements during Final Four weekend. A paid internship program, supported through separate fundraising efforts, will provide opportunities for underrepresented youth and young adults to get career experience and accelerated networking opportunities that come with a high-profile event.

In January, the MLOC unveiled its new business offices located in the U.S. Bank Plaza building downtown. The space is a tribute to the spirit of Minneapolis, and the city’s excitement about the return of the Final Four. It was designed and built through the generosity of more than 30 local businesses. While donated products and services are a significant characteristic of the office build-out, not everything was donated; Mortenson commissioned two original art works from a North Side based arts organization Juxtaposition Arts to adorn the office. She told Finance & Commerce magazine: “I think it’s a space that inspires. I feel good about it.”

Married into a family of ardent college hoops fans, Mortenson said she and her family have spent many a spring break afternoon indoors, taking in the fits and turns of March Madness. Her passion for the game makes her an inspirational ambassador to the 2019 Final Four. “None of this happens without the pure magic that is this signature, amateur sporting event. It is a galvanizing several weeks of basketball through March Madness leading into that first week in April, when student athletes will have earned their way to the opportunity of a lifetime – the Final Four. We will be here celebrating that achievement with those champions who play in April, along with the families who have supported them and with the community that welcomes them. This is a community that links arms and does ‘whatever it takes’ to deliver on the commitments we make. This is our opportunity to extend our best welcome to the world through the 2019 Final Four in Minneapolis. We’re excited to show the world that ‘winning happens here.’”