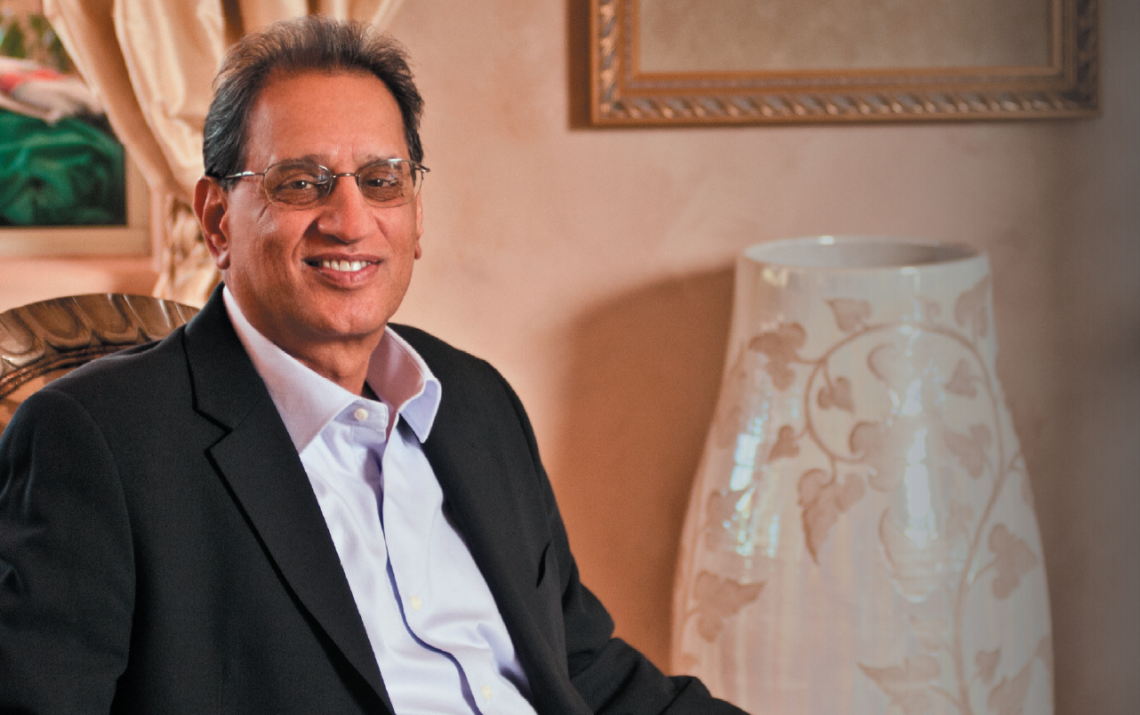 Kuldip Verma was born in the small village of Nabha, India. Until he was 10 years old, the village had no electricity, and residents hand-pumped and carried their water from the local well. With summer temperatures in excess of 100 degrees, the only air circulation came from manually-operated fans – wooden planks covered with cloth and pulled back and forth by a string.

The youngest of six children, Verma demonstrated a strong aptitude for mathematics at an early age. He topped his class of 60 students, obtaining perfect scores in math — including algebra, trigonometry, calculus and geometry. “Teachers said they had not seen this before,” Verma said.

Verma graduated with a Bachelor of Science in mechanical engineering from Thapar Institute of Engineering and Technology in India before he was 20 years old. “English was taught as a subject from the fifth grade. I was taught how to read and write, however, no conversations were held in English until I came to the United States at the age of 21,” Verma recalled.

A TASTE OF U.S. GLAMOUR & ENTREPRENEURING

Fascinated by the “U.S. glamour and lifestyle,” Verma made his way to Chicago in 1970, where he completed his Masters of Science in industrial engineering from the Illinois Institute of Technology. After working for Acme Barrel Company for a year, he was promoted to supervise the operations of the entire company at only 24 years of age. By the age of 30, Verma had established his own engineering consulting firm.

During Verma’s stay in the United States, his family established Beltek Electronics and began manufacturing televisions in collaboration with ITT in West Germany and later, with Toshiba in Japan. In 1985, Verma’s brothers urged him to return to India and work with them in furthering the thriving family business. “The opportunity was too good to pass up,” Verma said.

Beltek TV prospered during Verma’s tenure from 1985 to 1990, achieving 50 percent sales growth in 1989 alone. Beltek became one of the largest television manufacturers to the entire country and was the first to bring color televisions to India. In 1989, Verma received the Udyogh Rattan Award in Electronics, the highest industrial honor issued in India, and presented by the vice president of India. Beltek was often the sponsor of major “Bollywood” award functions and national television shows.

After achieving such success in his homeland, Verma was eager to return to the United States. He had always been interested in real estate investment and development. Ever the scientist, Verma embarked on a methodical study of the investment opportunities in the United States. “I explored all avenues. I first looked at the manufacturing industry. A lot was moving out of the country, so I did not think it was a wise place to invest,” Verma said. “I then looked at the stock market. I read several books and newsletters and analyzed them.”

“The overall return for the stock market is 7 percent for a 50-year average. For a person to make more than that, someone else has to lose money. I came to the conclusion that one must possess deeper knowledge of the company operations in order to make a large return. I wanted to find a way to get the best return and benefit the community at the same time.”

Verma identified growth opportunities in the southwest, as well as Texas and Florida. Phoenix, however, caught his particular attention. “Seventeen percent of Arizona is private land. It is one of the few areas with a dry, warm climate, a year-round outdoor lifestyle and cheap land,” Verma concluded.

In 1991, Verma purchased an office building on Camelback Road out of foreclosure. He purchased it for only $650,000 with a $200,000 down payment toward building improvements. A few years later he sold the building for $4 million. Verma developed this distressed property into a successful one-stop wedding mall, complete with two reception halls, a wedding chapel and retail shops. He then purchased several commercial buildings and added value to them.

Simultaneously, he purchased land in Waddell, calling it Sonoran Ridge Estate. He realized the land investment that he made brought him substantially bigger returns than the commercial buildings and with minimal hassle. Additionally, the population of metro Phoenix would grow at 3.5 percent a year and double over 20 years, which gave the city a new look and squeezing land availability.

In 2004, Verma liquidated his commercial buildings and focused on acquiring raw land. Why land? “There are no maintenance issues. It is the real asset in the real estate. All other real estate depreciates and eventually needs to be demolished. Land appreciates,” Verma explained.

Verma has proven that his investment formula yields golden rewards. Vermaland is one the largest wholesale buyers and sellers of land in Arizona, owning over 24,000 acres.

According to Verma, his success is due, in part, to the fact that he is constantly looking for new ways to grow. “During the recent real estate recession in Phoenix, I was constantly looking for new areas to expand our business and find different clients to sell to,” Verma said. “We were fortunate enough to start selling land to solar developers. Solar developers from all over the world began coming to Arizona to set up solar facilities during this time. We entered into over 25 agreements with developers to either sell, lease or to do a joint venture.”

It was this innovative approach to business that kept Verma’s company earning money through one of the toughest real estate crashes.

Vermaland has sold much of the farmland it owned – an estimated 15 percent of its holdings – to purchase 12,000 acres of raw desert land in the west Valley and southeast Valley. Now, 80 percent of the land owned by Vermaland is raw, untouched desert property near the farms the company once owned. Much of this raw desert land available in 2012 and 2013 was lender-owned. Sellers were having a hard time getting it off their books because there were so few buyers in the raw land market, largely because there was virtually no lender financing available for this kind of asset. Vermaland saw this as an opportunity.

Verma’s two daughters, Anita and Jennifer, both graduated with MBAs from the University of Southern California. Anita works with Verma as his director of marketing. “Anita is a very quick learner and does a lot on her own. She was instrumental in developing our solar energy projects,” Verma said.

Always looking to the future, Verma predicts that more housing will soon be in demand. “We are now experiencing a return to the robust housing market in the Phoenix metropolitan area,” Verma said. “I believe within two years housing prices will be back to 2006 levels. Prices for raw land have to follow. We will have the competitive edge to be successful in building housing to facilitate the coming population growth. I am hoping that Anita and Jennifer will both be involved in that. Our company’s business model makes sense because it is a win-win for everyone.”

APPRECIATING THE PAST & PAYING IT FORWARD

In honor of their parents, Anita and Jennifer Verma established the Verma Charitable Foundation. The Verma Legacy Trust made a land donation valued at $1.2 million to the Arizona Community Foundation. The gift is for the establishment of educational scholarships for underprivileged students and to build a retreat center in the Phoenix area. The center will promote healthy and balanced living, teaching yoga and meditation.

“I had educational opportunities. One of the things I wanted to give back was to help students who can’t afford to go to college,” Verma said. “It has also been my dream to have a retreat and yoga center where people can come to learn things that are conducive to a healthy lifestyle. I have been practicing yoga for a number of years, and it has helped me a lot and made me a better person. I am more giving in nature. I am more calm, peaceful and generally a better person. Some lifetime ailments can be taken care of by doing yoga exercises and proper breathing. I have seen the results.” He stressed that the center “shouldn’t be a money maker. It is about people who want to give to the community and volunteer to create a good feeling and healthy lifestyle.”

Verma is most thankful for his wife, Binu. “My wife has always given me her support,” Verma said. “She had a very successful career as a physician and single-handedly took care of me and our children. In Binu lies true strength.”

Verma names his older brother, Yash, as his greatest business mentor. “He was the one who started the television manufacturing business in India. He was really an entrepreneur. My father and mother were uneducated and couldn’t read and write even in their own language. My older brother took the lead and tried to make sure that everyone got an education. I am greatly indebted to him. He has been my best mentor. I have also learned from all of the people who have ever worked with me,” Verma said.

While Verma is proud of his business success, he was honored to receive the Philanthropist of the Year Award for 2013 – presented to him at the Arizona Real Estate Awards. According to Verma, the most important thing in life is to “be more giving. It is more happiness for you than anything else.”