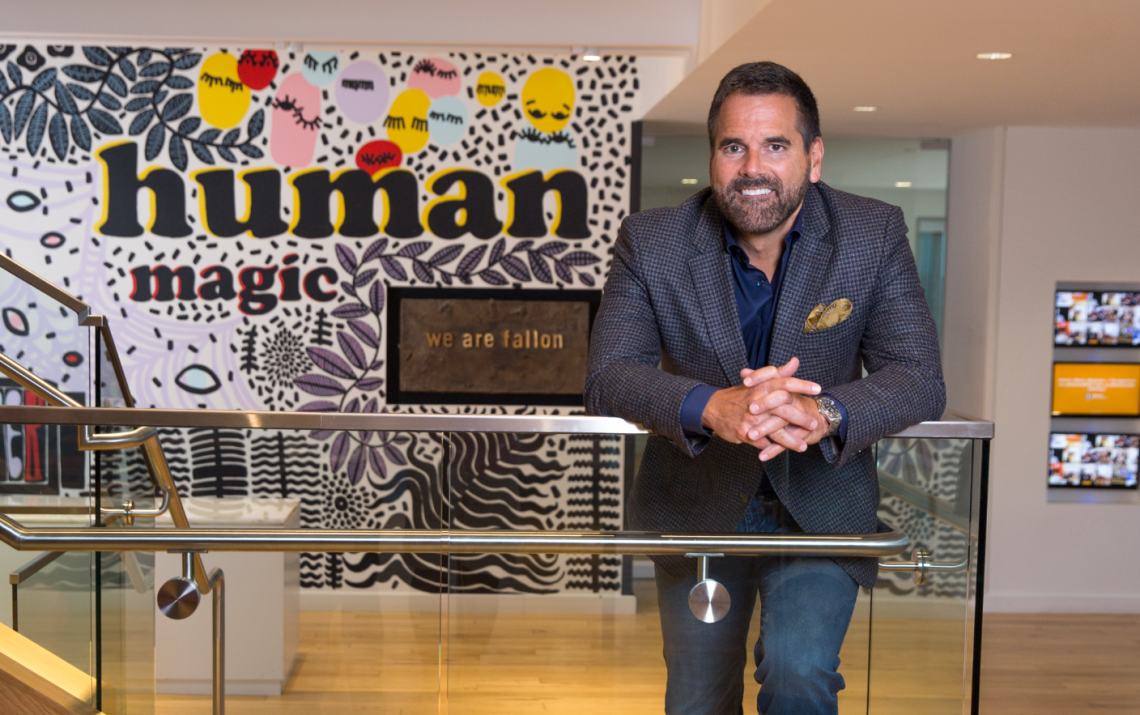 Think Monty Python meets Ren & Stimpy: glittering grilled cheese, snarky maxims, roasted meats and zany cats. This is a glimpse of the unconventional, sometimes irreverent and undeniably inventive website motif for avant-garde creative agency, Fallon Worldwide. (Cats do rule the Internet, right?) You simply can’t look away from the disjointed images that pinwheel from whimsical to semi-disturbing and finally culminate in the battle cry, “Creativity is your last legal means to gain an unfair advantage.”

I’m certain this is exactly what our nation’s fathers had in mind when they crafted the First Amendment.

Mike Buchner began his career at Fallon with a gamble. He was finishing his master’s degree in advertising at Northwestern University’s Medill School of Journalism, when a professor recommended that he interview with the representatives of an upstart, 50-person ad agency in Minnesota that had just won Agency of the Year for the first time. “Like a lot of other graduate programs, you had to bid points to get an interview with visiting agencies,” Buchner recalled. “To get on the list with Fallon, I had to bid a lot of points. In my mind, it was a heavy investment to risk on an agency in Minnesota I had never heard of. But my professor said, ‘You’ve gotta look at it. They have an amazing vision.’”

His gamble paid off big-time. Thirty-two years later, Buchner is the company’s CEO and leading visionary in this laboratory of creative geniuses, overseeing the promotional magic for mega-brands like Arby’s, Under Armour, Quicken Loans, Viacom (MTV and Comedy Central), H&R Block, General Mills, WhiteWave (Silk, Horizon Organic and International Delight Creamer) and Fanatics. What he and his wife believed would be a brief foray to “Fallon of the North,” has turned out to be a “great journey with no regrets.” A native son of Chicago, Buchner admits that he is still a diehard Bears fan, but he has long called the Twin Cities home.

Like rap artist Drake, Buchner “started from the bottom.” He worked his way up from assistant account executive to management and then to chief operating officer before advancing to CEO. “By coming to a smaller agency I was able to learn every facet of the business. Right from the beginning, I was exposed to some of the best creative talent in the industry and in the world. The people here were so fired up and so optimistic. When I met them I knew I’d be making a big mistake if I didn’t join this organization.”

Buchner described the company’s founder, the legendary Pat Fallon who passed away last year from a sudden stroke, as his friend, mentor and the “embodiment of the brand. I learned a lot from him, and I think a lot of people here and in the industry did, too. He spawned many leaders in our industry and in others. It’s amazing what this company, that used to be called ‘the experiment on the prairie,’ accomplished under Pat’s leadership. The last time I checked, there were 75 CEOs or chief creative officers around the world who spent time with Fallon.”

So where does the magic come from, and how has it endured for nearly four decades to continue generating the original ideas that drive our rapidly changing economy and morphing social consciousness? One word: culture.

“Pat certainly understood the value of culture, and as CEO I am trying to carry on as much as I can. The culture he and his founding partners built sprung from a list of core values they created before they even opened the doors. Those values became the pillars of the culture that lives with us today. We still share it with our employees here from the their very first day with us.” Single-minded devotion to and belief in the power of creativity. “This is exponential in terms of driving business forward. It’s the magic part of our business. As much as everyone is trying to measure effectiveness, there is still a lot of magic to things you can’t prognosticate. Arby’s success came from giving it a new voice. Sometimes things explode, and you don’t know why. I think the magic is alive and well here.”

An unconditional belief in the dignity of the individual. “This is vitally important to us. We’ve fired both employees and clients who didn’t treat each other with dignity and respect.”

Belief in family as a business model. “Sometimes we’re a dysfunctional family, but for the most part this is a great place to be. One thing you feel at Fallon is that everybody’s got your back. We pick each other up.”

Seeing risk taking as a friend. “Anything amazing we’ve ever done in this industry over the years has always included some degree of risk-taking. It’s just in our DNA to take risks and be a disruptive force. We believe that’s how you grow and that’s how you win in the marketplace.”

Success as a business imperative. “We believe the Fallon brand wasn’t born to be middling or just good enough. It was born to be great. Whichever way the economic winds are blowing, it is our birthright to be successful. We come here to do the best work of our lives.”

The importance of remaining humble. “A creative brand can burn brightly and burn out because of egos. We care about our clients as human beings, their customers as human beings, and each other as human beings. Telling the truth is an important part of this. If you can’t get to the truth, you’ll never get to a brilliant solution in the marketplace.”

The necessity of having fun. “If I know Pat Fallon, this is the one he believed in the most. He jammed a lot of fun into a long and successful career. He wanted us to work hard and play hard. He called us ‘the island of misfit toys.’ All kinds of people are part of our family – talented people who are interesting, and weird, and fun, and who don’t take life too seriously.”

According to Buchner, building a culture isn’t enough. Once established, it must be nurtured and evolved. “You don’t stand still. If you stand still in this business, you’ll get run over.” Buchner and his organization are forward-thinking and committed to finding new talent and embracing change. “What clients ultimately hire us for is not to evaluate their marketing plans from the past, but to find the next disrupting factor.”

The creative wizards at Fallon found the disruptor for Arby’s when they selected actor Ving Rhames as the brand’s new spokesman, swelling the company’s flagging sales and catapulting it into the limelight of popular culture. “Once they had a new voice, it just changed everything. It gave the brand great confidence, and once you have that, you can do anything. The results have been nothing short of spectacular, with sales up double-digits in the last two years in a category that is relatively flat. I give a lot of credit to the CEO and chief marketing officer, who had a vision for modernizing the brand and creating a better experience for their customer.”

Finding and keeping the right talent are vital to helping clients monetize their dreams. Fallon provides an environment where big, transformational ideas thrive and the people who generate them are treated with respect. “Everyone here is interested in creativity, but the secret is allowing them not just to produce, but to get their ideas out into the world in a tangible way. We put ideas out into the world that make money for our clients and also allow our talent to make a reputation for themselves. We try to be as prolific as we can be. We want to create a culture of makers, not talkers.”

Buchner’s future plans for Fallon include the diversification and decentralization of the company’s workforce. Going forward, new hires will have hybrid skills. “Someone doing project management and account work will also be able to help produce something. We also have the notion that the best ideas pull from people from different backgrounds and perspectives on the world and different geographies. Trying to migrate all of those people to Minnesota doesn’t work. But through technology, we can successfully integrate them into our systems and culture. We see the amazing convergence of technology and entertainment coming together in L.A. and the vast talent in New York, which is still the epicenter of advertising, and we know that a lot of people on the Coasts who know our reputation would join us in a heartbeat if we had a satellite office in their region. We want the best and most modern talent this industry can tap.”

Advertising is simply a modern incarnation of one of humanity’s oldest pastimes – storytelling. Great advertising tells a brand’s story in a way that gets on the side of the consumer and makes it relevant in culture. Even in a world where technology is king, Buchner says there is “still room for great storytelling and the magic we create. Brands still need a point of view and to make friends in the world. We dig deep for truth and use it to inform the work that we put out in the world.”

Pat Fallon penned these words about the wondrous world he imagined and the magic that lives on in the culture he created: “Organizations need storytellers. Storytelling is the device that creates and maintains traditions. Every successful company has its own tales that are kept alive through actions, speeches, writing and workplace socialization. … Fallon is a timeless tribute to dreamers everywhere: To those who accomplish what others believe to be impossible.”