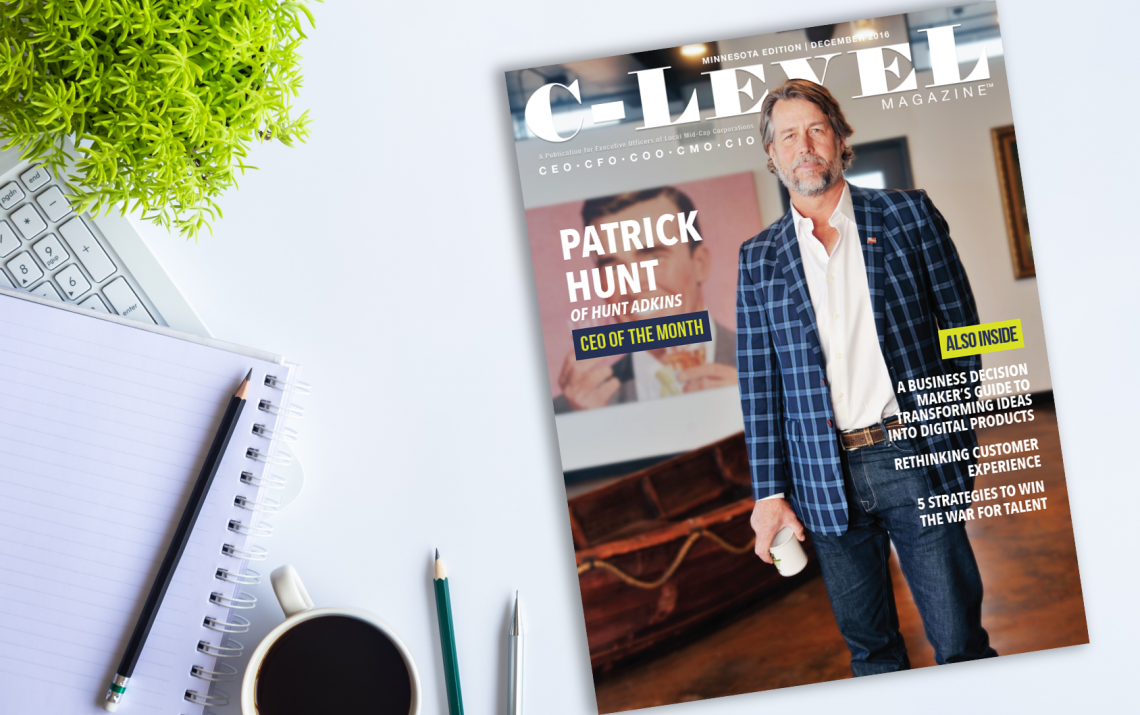 Here’s a conundrum. How do you wrangle a world-weary, time-depleted and sales-savvy generation into pausing over the off, skip, fast-forward or delete button of whatever electronic device they happen to have in hand at the moment long enough to hear a few seconds of carefully crafted genius about a subject they may not know interests them?

The answer, according to Patrick Hunt: “At the end of the day, you have to respect the intelligence of the consumer.”

That’s pretty profound. So who is this guy, Hunt, and why does his opinion matter? It matters because he is the president and CEO of a radically distinctive and slightly heretical ad agency called Hunt Adkins, an organization of rebel philosophers who consider the world and all its media their playground. They are not afraid to smash convention or raze expectations to get their message heard, but in the end, they want that message to be relevant and moving, a message that strikes at the heart of its intended audience with an audible squish.

“This is a subjective business,” Hunt continued. “Since the dawn of time, people have been trying to figure out more accurate ways to measure results. With technology and click-through rates, we’re getting closer. But the thing you can’t predict is the impact of emotion in how you present a message. Having integrity in this business is another essential. It’s one of the reasons you see so many names on agency nameplates. We are standing by what we promise and deliver to clients. So often it comes down to them trusting us, and then us trusting our gut, like when we used a TV spot of a screaming lizard to sell Mystic Lake Casino.”

Ah – a reference to the heady beginnings of the Hunt Adkins dynasty and their first client, the innovators of tribal government gaming. But first, the preamble.

Hunt came to advertising via the circuitous route. He grew up in Milwaukee thinking he wanted to become an architect, until his father talked him out of it. Then, he headed to the University of Minnesota, where he proved proficient in business and banking classes, was one of five applicants considered for a position at First Bank of Milwaukee, and then passed over. However, he described that early rejection as “one of the greatest things that ever happened to me. I decided to become a ski bum for a year while I decided what to do next.”

Inspired by a conversation with a former college roommate, Hunt and a friend began a successful newspaper called the Canyon Times in the vibrant ski community surrounding Sandy, Utah. Amid his publishing success, a resourceful Hunt arranged to meet advertising legend, Pat Fallon, who was visiting the Snowbird resort. After hearing Fallon speak, Hunt was determined to work for him. “I used my ski bum instincts and went up to him and said, ‘I heard you were in Snowbird. I’d be willing to ski with your wife and son while you’re here.’ So we skied for a few days and developed a friendship.” Hunt was later interviewed by Fallon’s current CEO, Mike Buchner, and hired. After a spirited run at Fallon, where he worked on A-list accounts including Federal Express, O.M. Scott & Sons and Hush Puppies, Hunt’s entrepreneurial fever returned.

Grateful for the ride but not feeling fully expressed, Hunt left Fallon to launch his own advertising empire, which began as Hunt Consortium in 1991. Then came the opportunity to pitch the aforementioned Mystic Lake Casino with colleague Mike Murray. They won their bet on Mystic and hired uber-talented wordsmith and bard of buzz, Doug Adkins. “He has become known as one of the most brilliant copywriters in the country. The integrity of his creative vision is as good as it gets. From the beginning, his work was so unique and strategically relevant. He could produce, and I could sell.”

Thus, Hunt Adkins came into the world like a fresh, wriggling – well, screaming – lizard. The symbiosis of Messrs. Hunt and Adkins has yielded a diverse cabinet of advertising curiosities spanning cheeky pub billboards to dignified campaigns for the world’s leading health innovators. “I applied so much of what I learned at Fallon. Tom McElligott and Pat Fallon had a completely new approach to advertising and creativity. The founders of Mystic were among the first tribes to have the vision of the business of tribal government gaming. They took a bold step, and it was our job to help them build a brand that was completely unique and counter to convention. In the early ’90s, when people were deciding what to do on a Saturday night, they didn’t say, ‘Let’s go to the reservation.’ We wanted to show that it was fun and legitimate, a place where there are a lot of people like you. They let us execute boldly, and it was a success.”

At the other end of the spectrum is the work Hunt Adkins has done for Mayo Clinic. “It is such an amazing opportunity for an ad agency to be involved in something so noble. We’re very proud to be a partner with what we consider one of the most noble brands in the world.”

These are nice guys, but be warned, they will eat their competition with some fava beans and a nice chianti. But not in a bad way. They are unhurried in their insistence upon excellence and unapologetic about savoring every morsel of truth to yield perspective with substance. “We’re willing to spend our time and resources getting to know people. If we are going to build a relationship with the consumer, the least we can do is demonstrate that we took the time to know who they really are. There is a desire on the consumer’s part to challenged, surprised and even provoked to action. They want something in return for their attention which goes beyond just being understood. Today’s consumers have all the control. They can change channels or hurt a brand with a critique on social media. We look for the highest common denominator. We’re not going to dumb things down. We’re going to have an informed conversation with our target audience, or not at all.”

Hunt Adkins isn’t looking for client drones. “We like a confident client – anybody who is willing to do something different. Leadership by definition is getting out and doing something that hasn’t been done before. The types of brands we work with well are not contingent upon size or category, but upon a shared perspective. But I think a creative agency can fall into a trap of applying their own brand to all their clients. We need to bring point-of-view, but also honor their brand.”

The agency isn’t looking for employee drones, either. “We believe in hiring really smart people who are engaged and passionate, teaching them what we know, and getting out of their way. We’ve created a unique culture, where we’ve let the employees define the culture. Our core tenets have always been consistent, and it is also imprinted by the people here. We believe in building personal responsibility and independent, entrepreneurial thinkers.”

An inspired idea for developing the next generation of talent came one night over martinis, where all good ideas come from. Hunt and company concepted “HATCH,” an incubator for aspiring ad professionals. “We have lots of requests for internships, but can only offer a limited number. Our solution was to create a pop-up agency. We get a real, non-roster client, hire up to 30 students and put them in buckets according to their interests, and we facilitate a real campaign. We start and close down the agency in 30 days. It’s an awesome experience for everybody, and we’re now going into our third year.”

Hunt manages to integrate some of his greatest passions with his work, among them, the greatest game – golf. He inherited his love of the sport from his father and has learned for himself that golf imitates life. “You are entirely responsible for your performance in light of a lot of variables. You learn to deal with the pressure of competition, and it’s a place to develop camaraderie and friendship. Most of all, it’s an integrity sport. If I ever want to find out more about someone I’m thinking of doing business with, I’ll spend four hours with them on the golf course and learn everything I need to know.”

Hunt joined Hazeltine National Golf Club in 1994. He has served on the executive committee for the PGA, and in 2002, he helped to run the most successful PGA championship in history. He also helped to produce the 2009 PGA Championship, which excelled even though the preceding year-and-a-half was the genesis of the Great Recession. In 2016, Hunt served as general chairman of the prestigious Ryder Cup, hosted at Hazeltine. “The Ryder Cup has grown by every metric to be the largest golf event in the world,” he said. “This year, it was broadcast to 500 million households in 200 countries. We brought in about 270,000 people to the Twin Cities in six days, and generated over $135 million in the community. It was a once-in-a-lifetime opportunity to serve in this capacity. Without question, it is our mission to give back to the community as a club, and one of the ways we do this is by hosting national championships. In this case, it was an international event.”

The real secret in the sauce of this Midwestern-born ski-bum-turned-advertising- virtuoso is his authenticity. Borrowing from the (actual) Bard, he said, “You have to be true to yourself. Know who you are. I want to give everyone here a bigger forum to express themselves. Our staff ’s brilliance is about creativity and discovery. We are constantly morphing. The success we feel we have is outdated about the time we take our next breath. Failure is not an option, and the more authentic we are, the more successful we become.”