Tim Bosiacki: Building Community ONE MEMBER at a TIME 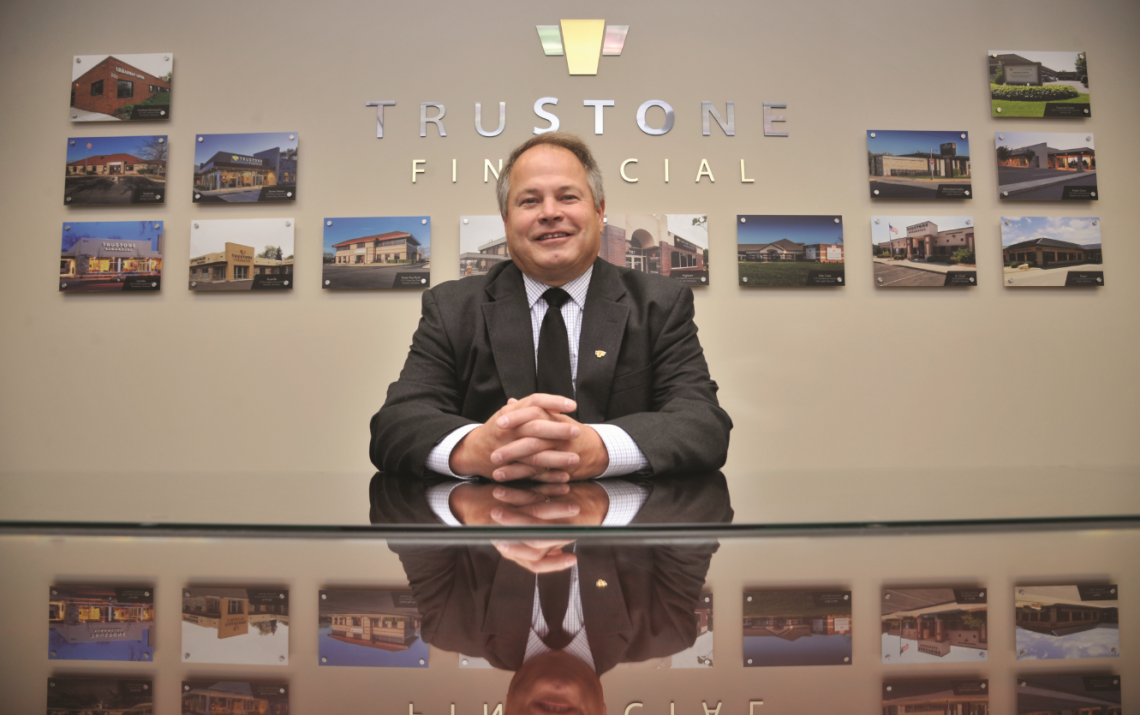 When Tim Bosiacki joined TruStone Financial Federal Credit Union as its CEO in 2010, he came with a vision to inspire employees in an organization that was stable, but lacked that certain spark that ignites progress. To do this, he recognized that he had to create the professional fulfillment and purpose necessary to create growth and prosperity for the employees, the credit union and the members they serve. Six years later, Bosiacki has fulfilled his vision and created not only an award-winning workplace, but a culture which has positioned TruStone for continued growth.

Bosiacki hails from Hermantown, Minnesota and originally wanted to become a teacher. He earned his teaching degree, but soon there after changed course and ultimately decided to pursue a career in financial services. He and wife, Dee Dee, moved to the Twin Cities, which offered more jobs in this field. He worked for a finance company and then for a credit union, and as his reputation grew, so did his opportunities. Bosiacki spent the majority of his career rising up the ranks of TCF Bank, ultimately becoming an executive vice president overseeing its Arizona and Colorado markets. He was living in Colorado when he was recruited for the opportunity to become the CEO of TruStone.

“A recruiter called me out of the blue and asked if I’d be interested in moving back to Minnesota,” Bosiacki recalled. “Both of our children had come back here for college, and I knew my wife wanted to get back, as well. And I had always wanted an opportunity to lead a financial institution. So I met with the board of directors at TruStone, they unveiled the work that needed to be done, I got the nod and we’ve never looked back.”

Bosiacki recently marked his sixth anniversary as CEO, and in these few short years under his leadership the organization has grown to $1.1 billion in assets, a 62 percent increase since 2010. Membership has swelled nearly 73 percent to a staggering 100,000-plus members. Th e credit union has also doubled its branch footprint and entered the Milwaukee market, and its return on assets has more than doubled. Today, TruStone Financial is one of the largest credit unions in Minnesota.

So what accounts for this prosperity? It is Bosiacki’s focus on the other two points of his vision: professional fulfillment and a clear sense of purpose.

Bosiacki realized that he needed to better engage TruStone’s employees in order to achieve the growth he believed was necessary for the credit union to thrive during a period of increased industry consolidation. He began by observing, asking questions and getting to know the people inside his organization. What were their jobs? How did they perceive their roles? What were their personal goals? What did their members look like? What did the service experience feel like from the member perspective? What was working, and what wasn’t? In answering these questions, Bosiacki discovered a need for a more proactive approach to customer service, one that involved being much more than a staff of order takers. Th is task required a shift in culture, and setting clear expectations with TruStone’s employees.

While forging his new path, Bosiacki began to generate excitement. TruStone became a progressive place to work, a place where ideas were welcome and a whole new identity was being defined and put out into the community. He infused his organization with new leadership, fresh ideas, expanded products and leading edge technology.

One place where Bosiacki focused his revitalization efforts was lending. “We had too many delinquent loans and no clear understanding of what caused the problem. Had we made too many poor lending decisions? Were members still suffering from the effects of the Great Recession and, if so, could we help them? We simply did not know. So, I sat down with the entire collections department and went over every delinquent account. I don’t know if that had ever been done before. But I wanted to show that we have to understand our member, not just collect money from them and do it again next month. We looked at each file to try to understand the problem. Was it the interest rate? Unemployment? Was the loan even collectible? Would it be a long-term liability? Was it a problem we could solve? As expectations were reestablished, delinquent loans plummeted. Today, the credit union leads the industry in delinquency ratio and is envious amongst our peers.”

He also recognized that credit union members had a need for affordable mortgages as the economy improved. He set about expanding TruStone Financial’s mortgage subsidiary, Mortgage Lending Services which had nine employees in 2010 and now employs more than 60. Th is group currently originates more than $20 million in home loans every month and is emblematic of the changes Bosiacki ushered in at TruStone.

Bosiacki recognized that his goals could only be achieved with the right people in positions of leadership. He revamped and expanded the senior management team with a careful eye toward hiring those whose judgment he trusted. “I believe you are only as good as your people. We have a lot of good people here who know their business, so it’s important to trust them to make decisions. When you bring in talented people, they bring in talented people. Now that my team is intact, one of my responsibilities is to make sure they have growth opportunities and additional responsibilities as their career unfolds.”

The company’s well-defined mission and values create a work environment that is positive and progressive, with a commitment to learning, building relationships, understanding the member, and promoting thrift . Employees are motivated and encouraged to expand their own skills and support colleagues and customers in reaching their goals. It is not surprising that TruStone was awarded one of Twin Cities Business Magazine Best Places to do Business with in 2016. And, for the third consecutive year, TruStone was named one of the Best Credit Unions to Work For by Credit Union Journal in partnership with Best Companies Group, the only Minnesota credit union to receive this honor.

One of the greater challenges which remain for Bosiacki is changing the perception of TruStone and what it can provide for customers who are looking for a new financial services provider and think that it’s too hard to join a credit union. “Th ere is still a misconception that people can only join a credit union if they work for a certain company or belong to a particular club. In fact, our membership is open to anyone who lives, works or worships in Minneapolis, St. Paul, St. Cloud and numerous counties in eastern Wisconsin. Our reach is continually expanding with new mergers and acquisitions, and branch openings.” Just recently, members of Wisconsin- based Kenosha Postal Employees Credit Union voted to merge with TruStone Financial, eff ective Sept. 10, 2016, and TruStone celebrated the opening of its newest branch in Northeast Minneapolis with a ribbon-cutting ceremony Sept. 23, 2016. When Bosiacki first took helm, the credit union had five branch locations. Six years later, the opening of the company’s 14th branch is slated for 2017.

Bosiacki believes that credit unions – which are owned by their members – have a broader appeal than ever before. TruStone is a financial institution with technology, products, services and interest rates that are competitive with regional and commercial banks, but it is different in that it is centered on making decisions driven by overall membership satisfaction rather than overall profit. “Sometimes we make decisions that aren’t profit-driven. We look at things over the long-term and how it will benefit our membership in the long run. For instance, instead of charging a high interest rate on a loan and giving a low deposit rate in order to maximize our profits, you’ll likely find that we remain extremely competitive across all product lines.”

He continues, “The last decade has brought significant change in the way that financial services are delivered. Our challenge is to recognize that our legacy members and new members sometimes have different expectations for how financial services are provided. Our newer members embrace our industry-leading technological offerings, including a modern online presence, mobile banking solutions and investment in cybersecurity. We also value our legacy members, some of whom have been here for 50 to 70 years and who remember when we operated out of a little white house on Douglas Drive in Golden Valley. We want to take care of both.”

TruStone is also a good neighbor. The company promotes unity amongst its staff and community by encouraging employees to reach out and become involved in whatever is important to its members, as well as to look for opportunities to serve where there is need. This year alone, employees will participate in more than 100 community events. “We attend community festivals, parades and sponsor everything from 5K runs to Little League. We want to be a force for good in the community and in the neighborhoods we serve.”

In 2009, the TruStone Financial Foundation was established to reinforce TruStone Financial’s commitment to the communities it serves and support life-long learning and financial wellness. The foundation provides scholarships to further financial education and help recipients understand the importance of managing money through education in the community and classroom. Foundation membership is not limited to credit union members, and it offers a wonderful way for those with a passion for financial literacy, particularly in teenagers and young adults, to give back.

Bosiacki and his team are successfully building a credit union that both members and employees can be proud of. His approach to leadership, focus on culture and ensuring a clear sense of purpose for all employees has created a prosperous and sustainable credit union in an uncertain economy. “All I ask is that every day our employees come to work, bring value, and do it with a smile. The rest will take care of itself.”