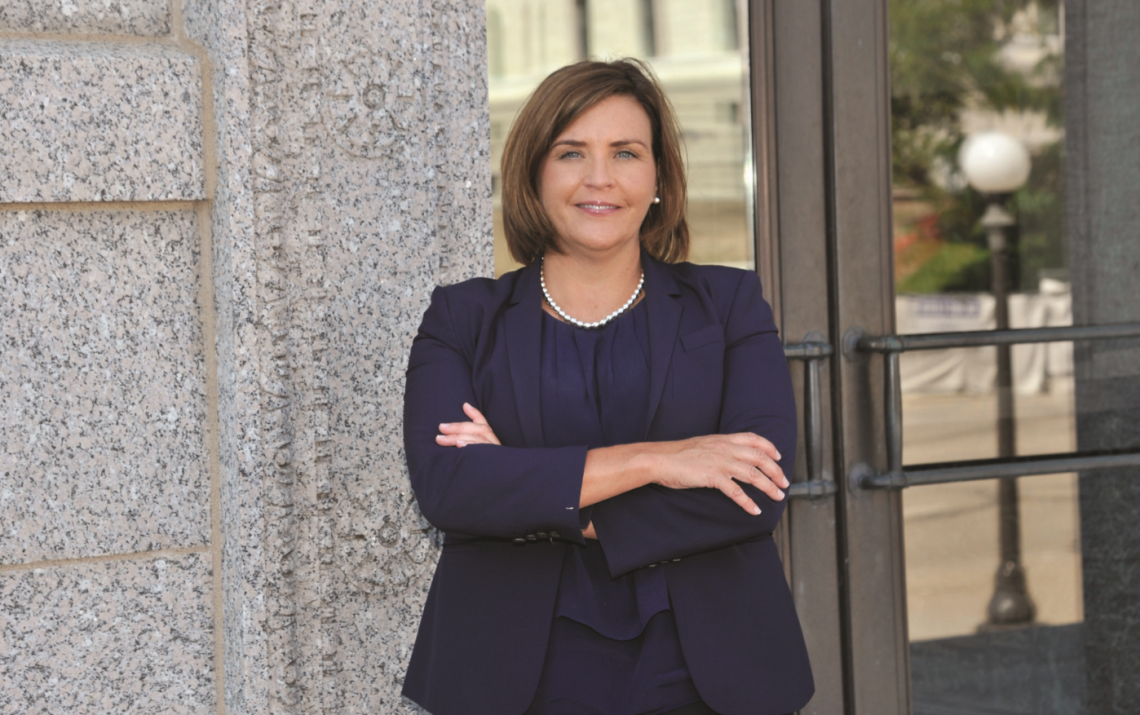 When Minnesota Gov. Mark Dayton needed someone he could trust – someone with the heart and tenacity to spearhead the complex and untested new program designed to convey health insurance coverage to all of his state’s citizens – he called Allison O’Toole. As CEO of MNsure, Minnesota’s health care insurance marketplace in accordance with the Affordable Care Act (ACA), Allison O’Toole has proven she was the right call. She has undertaken her role with passion and determination, committed to improving the lives of the citizens in her care.

“I believe in what we’re doing,” O’Toole said. “After the initial rollout of the ACA went poorly here and all across the country, the organization needed help. Our biggest job has been opening the windows to increase transparency and accountability, and to regain the public trust so people would enroll in health coverage.”

O’Toole’s mantra of “transparency and accountability” has rung true with Minnesotans. The uninsured rate is at its lowest level in the state’s history, as a staggering 96 percent of Minnesotans now have health coverage, many of whom were among the long-time uninsured. “For the first time ever we met our enrollment goal for the third open enrollment period. People have saved over $81 million in tax credits by buying through the exchange, and most importantly, they have peace of mind. Th is is not just the result of my work; it is the result of the work of an army of hardworking people around me here and across the state.”

Under O’Toole’s leadership, MNsure has balanced its budget by living within its means and weaning itself off federal funding provided to get the exchange up and running. “We’ve managed on a tight budget,” she said. “While up to now we have been funded primarily through federal grant funding, going forward we will be self-sustaining through revenues generated from plans sold through our site. Our organization is stable.”

While MNsure does not play a role in creating policy or setting insurance rates, O’Toole is committed to being a voice for the state’s consumers. “there is still a robust policy debate on how we cover people here. the law is not perfect, and it is high time in Minnesota for a policy discussion about how we will stabilize the individual market and smooth out the financial cliff s at certain income levels. Some of these are things that weren’t necessarily envisioned in the beginning. Now there is a need to tweak the law with what we know. I hope there is the political courage to have an honest conversation about how to make it better. I’ll do what I can from my seat to help convene a policy discussion. I can paint the consumer picture for policymakers. We’re working hard to be successful and serve every Minnesotan, but we are not here to play politics. I don’t think you should play politics with people’s health care.”

One area of concern to many is the recent pullout of Blue Cross Blue Shield. “One third of our individual market was cut loose, many aft er being insured for decades. We have 100,000 Minnesotans who now have to shop for new coverage. Many were loyal customers of Blue Cross who have never had to shop for insurance in the post-ACA environment. I want to make sure they have accurate information and know what to do to get coverage. We are the only place consumers can do an apples-to-apples comparison to make sure they are getting the most for their money. We are also the only place to access public programs, and we don’t want people to leave any money on the table. Th rough us, they can do comparisons across carriers and look at not just premium costs, but also prescription co-pays, deductibles and co-insurance.”

O’Toole will be hitting the bricks for the next several months to connect directly with Minnesotans wherever they are in the state, helping to answer their questions and teaching them how to make use of MNsure during the next open enrollment period of Nov. 1, 2016, through Jan. 31, 2017.

“We were at Farmfest a few weeks ago, which was an important place for us to be, especially since many family farmers were people who had Blue Cross coverage. We are looking for every avenue to connect with people and remind them that they can save money by using us. We’ve also built a network of trusted community partners and priority brokers across the state. Th is is another way for us to access consumers through people they already know and trust.”

O’Toole describes herself as a “practical, feet on the ground person,” and as a leader, she is visible and right in the trenches with her team. From the early days of her career working with the legendary Skip Humphrey, she learned to fight fearlessly for consumers while surrounding herself with talented people. “I have what I call my court of appeals, people from diff erent sectors who are not yes people, who will review my decisions and give me good advice.”

O’Toole knows the majority of her roughly 200 employees by name, and she has cultivated a tightknit work environment characterized by teamwork and compassion. She shared some of the leadership principles that make her organization so eff ective:

Say thank you – a lot. “I say it with a genuine email or a heartfelt note. People can tell if you’re authentic, and it’s important for them to know their contribution is appreciated.”

Keep everyone up. “That doesn’t mean being so in the flowers that you’re unrealistic; it means really knowing what your team is going through and giving them the support they need.”

Make sure people have opportunities for growth and advancement. “We have a strong management team and do a lot of internal promotions.”

Encourage and implement ideas. “We have an employee engagement committee that reports directly to me. They are self-selected, and I have charged them to come up with ideas and set the culture here. They set the tone, and I help them implement it.”

Embrace diversity. “We have the most diverse staff among state agencies, and that is not by accident. We need to reflect the people we are serving. I absolutely think that adds to our success around here. We have a lot of minds and viewpoints at the table, and that makes us rich.”

As a woman CEO, O’Toole is one of an elite crowd. As of 2012, only 20 Fortune 500 CEOs were female. “I see it as part of my job to be a role model for others. I open doors for both men and women, and give every ethnicity equal opportunity. I’ve been fortunate in my life to always be surrounded by strong women, and I’ve had many strong mentors through my career who were female. But it all began with my mom, who is one of the strongest women I’ve ever met. She’s been practicing law her whole life, and now she is an arbitrator. She also teaches kids’ swimming lessons at the Y, and she kayaks and gardens. She has always been a great inspiration to me.”

O’Toole has a long history of improving the lives of the people within her reach. From her early childhood working alongside her father at family-owned O’Toole Drug, located in a working class neighborhood in the Twin Cities, to her career in both the public and private sectors, there has been a consistent theme of serving and advocating for underserved people with transparency and accountability.

“I grew up listening to my dad helping our customers to be healthy and live better lives. That’s where my foundation of service comes from. I am lucky to be working with an amazing group of people who are so committed to raising the quality of life for Minnesotans.”