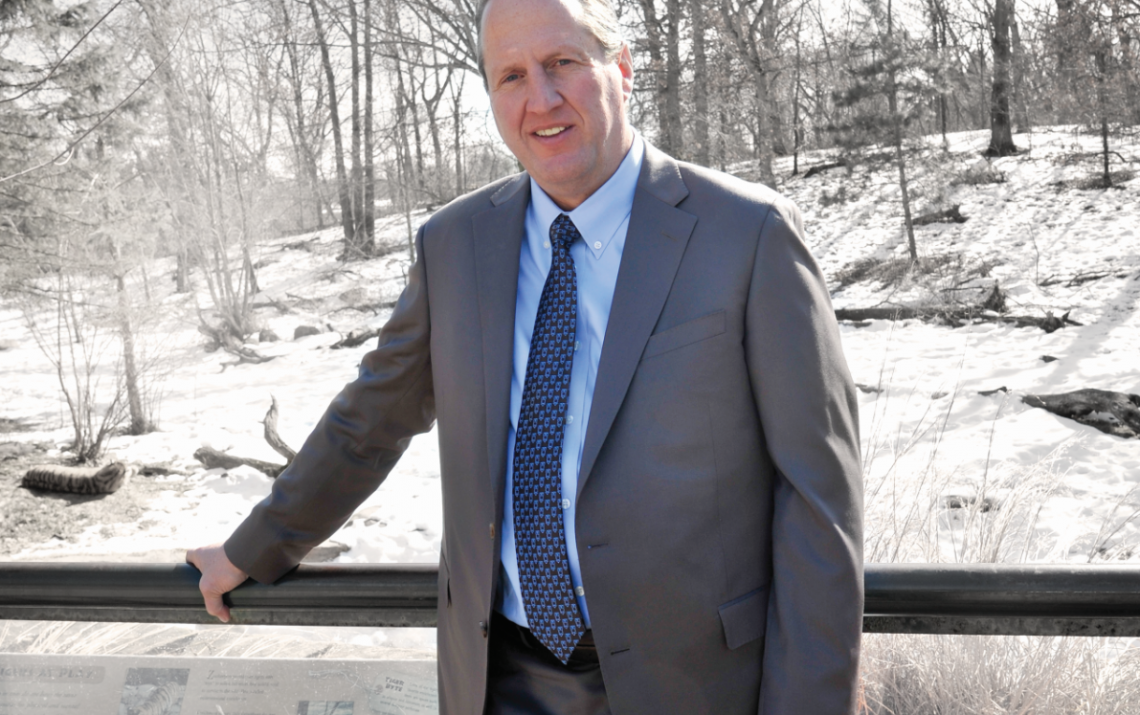 On his third day as director and president of the Minnesota Zoo, John Frawley received an email from the mother of a young girl who was undergoing treatment at a local children’s hospital. “The day she was diagnosed and got bad news was the same day that the zoo was there interacting with this young girl and interviewing her about animals,” Frawley said. “The mom wrote back to us and said that because the zoo was there, it took their minds off the bad news and helped them navigate what would have been one of the worst days of their lives. She said, ‘Thank you for being there for my daughter and for our family.’”

According to Frawley, that simple and heartfelt expression of thanks eloquently sums up what is so important about the Minnesota Zoo. “A lot of people think it’s only about the animals. But for me, our purpose is more core to being here for the people of Minnesota. When people go to the zoo, they might not just go to see the animals. They may have a crisis at home or in their family, and they need a place to go where they can feel safe to get their mind off things – a place they can trust. Out of the 1.2 million people coming here every year, there may be a family who has just found out that someone in the family has cancer, or a dad who only gets to see his kids once a month and wants those days to be perfect.”

The zoo’s mission to “connect people with animals and the natural world to save wildlife” is a calling that emphasizes the interconnectedness of all living things and honors the ways in which people and animals may live in harmony with one another. It takes an extraordinary person to oversee a mission that big, and John Frawley is definitely the man for the job.

A native son of Red Wing, Minnesota, Frawley says that growing up with parents who allowed him to be a part of the outdoors helped to shape his character and inspired his lifelong passion for wildlife and the environment. “I think back to those early years and realize it was always there for me. When I was young and going through stressful or awkward things, I’d find myself out in the woods. I loved hiking and cross-country skiing. I now have this inner calling to protect those wild places and wildlife experiences that were there for me as a kid. That was the beginning of my career, and I didn’t even know it.”

In keeping with his belief that “we love what we experience,” Frawley has devoted his career to ecological conservation and the facilitation of wildlife experiences. He attended Minnesota State University, Mankato on a football scholarship, and earned his degree in parks and recreation services with an emphasis on wildlife management.

Frawley took his first industry position at the Gladys Porter Zoo in Brownsville, Texas, where he worked with a variety of animals in different settings. When he and his bride, Anita, returned to Minnesota, he became a keeper for the Minnesota Zoo, working with exotic domestics like reindeer and llamas. He went on to manage the nature center at the theme park inside the Mall of America, which became a training ground for him to learn the intricacies of business and operations. He then relocated to San Francisco, where he became a person of note in the zoo and aquarium community. He led the crusade for the preservation of the San Francisco Bay and its watershed as president and CEO of bay.org.

When Frawley heard that his good friend and colleague Lee Ehmke was leaving his position as director of the Minnesota Zoo, Frawley was thrilled by the chance to return home and reunite with the people and places he loves most. “For the last 19 years, when anyone asked where I was from, I’d say, ‘Minnesota, but I’m currently working in San Francisco.’ I’ve never left my loyalty to the state, and I’m forever reminding people that Minnesota has been voted one of the best places in the country to live. That does not happen by accident. Our government works in Minnesota; it’s making a real difference. The zoo is also a state agency. In a state where government and people are all working hard to make this the best place to work and live, we can afford to give them a world class environmental experience. People here deserve it.”

And giving Minnesotans an unparalleled environmental experience is exactly what Frawley intends to do. He describes his predecessor as a “master planner who brought in world class exhibits and enriched our animal habitats. I want to synergize with that momentum and continue that work.”

But his own vision for the zoo also involves connecting it to the fabric of Minnesota and bringing the zoo outside its gates to the people. “We are reaching more than a half a million people a year through our education program. Our Zoomobile reaches more than half the counties in Minnesota. If the kids can’t come to our zoo, we go to them. Our outreach has grown, but we need to work harder to reach underserved communities. There are so many obstacles – transportation, finances and time – but it’s a priority for us. We’re a state zoo, and we’re here to serve the state.”

Only 30 percent of the zoo’s funding comes from state appropriation. The rest comes from earned revenue by the zoo and from philanthropic gifts to the Minnesota Zoo Foundation, the zoo’s nonprofit partner. Frawley has high praise for the 60 board members of the zoo and foundation who help by connecting the zoo with individual, corporate and community assets. “Those 60 leaders are there to help me and help the zoo,” he said. “It’s one of the best resources in the world that you don’t get in the for profit world.”

There are many opportunities for corporations to get involved, whether it is by sponsoring the annual Beastly Ball, sponsoring an exhibit, or sponsoring zoo events. Benefits include brand exposure to the more than one million annual visitors, and the satisfaction of supporting an organization that is both a leader in education, as well as in local, national and global wildlife conservation. Companies or individuals can also host memorable meetings and events, and support the zoo at the same time, by renting the entire zoo or utilizing its fun and original event venues.

Ultimately, the zoo is an organization for people, by people. This summer, Minnesota Zoo volunteers will reach a staggering three million hours of service to the zoo. “The passion of people in zoos is driven by their love of animals. We have keepers here who have dedicated their entire life’s work to the care of a single animal species. Some of our educators have been teaching for 20 and 30 years, class after class. That is dedication; they are the heroes.”

The extraordinary work being done in this nearly 500-acre facility by hundreds of passionate individuals is measurably affecting the lives of humans, as well as a multitude of other species with whom we share the planet. Last year alone, zoos around the country dedicated $160 million to animal field conservation, with an impact felt by 25,000 endangered species around the globe. The Minnesota Zoo is not only working to conserve indigenous species, but is also known for its support of exotic species, including tigers, Asian wild horses and black rhinos.

“Zoos have shifted over the years to become tools for conservation,” Frawley explained. “Any good industry promotes and endorses change. Here, we have set an extremely high standard for animal welfare and care. Outside, we know we will never get our pristine wilds back. What we are fighting for now is a way to live in harmony and find common ground. We’re giving animals a voice by allowing people to get close to them. I invite all Minnesotans to take the time to visit us and connect their families and their companies with animals and the natural world.”